Originally appeared on The American Conservative.

The Chicago Council on Global Affairs recently released the results of a new survey on U.S. public opinion on arms sales and the U.S.-Saudi relationship:

As Congress weighs the decision by the Trump Administration to sell additional weapons to Saudi Arabia, a newly completed survey of US public opinion finds that most Americans oppose the US sale of weapons in general, and they are fairly divided on whether the US relationship with Riyadh makes a positive or negative contribution to US national security.

The survey found that a large majority of Americans (70%) believes that arms sales to other governments makes the US less safe, and 50% believe that the relationship with the Saudis weakens US national security. Somewhat surprisingly, there were large majorities that said arms sales made the US less safe regardless of political affiliation. Republicans were a little less likely to give that answer and Democrats were a little more likely, but there is broad consensus among Americans that arms sales are bad for US security. 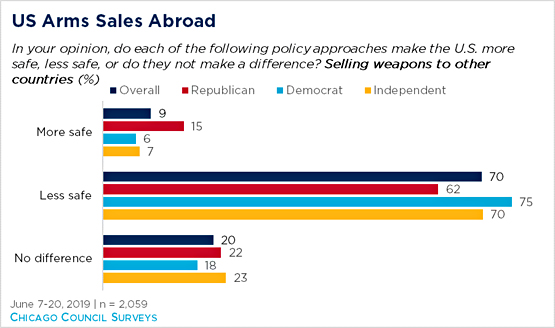 Despite this broad consensus that arms sales are bad for US security, public opinion is more evenly divided on the value of the relationship with Riyadh. Most Republicans have a favorable view of the relationship, but most Democrats and independents take the opposite position. Saudi Arabia is one of the best examples of how US arms sales are harming our security and the security of the Middle East. They have not only used U.S.-made weapons to kill thousands of civilians in an aggressive war against their neighbor, but they and the UAE have been diverting some of the weapons our government sold them to Yemeni militias and the allies of terrorists. The Saudi coalition war has strengthened Al Qaeda in the Arabian Peninsula (AQAP), and the coalition and its proxies have fought alongside AQAP members, armed them, recruited them, and paid them. You could not ask for a clearer case of US arms sales directly fueling groups that threaten the US and our allies, but there appears to be a disconnect between recognizing that arms sales generally are harmful to our security and understanding that the U.S.-Saudi relationship exemplifies how arms sales are harmful. 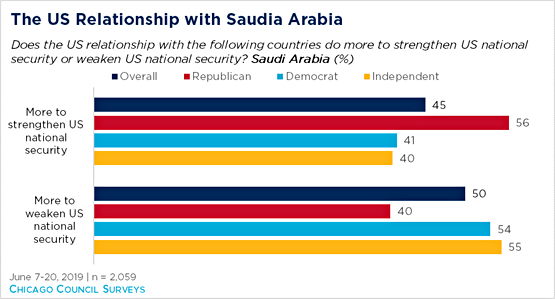 It would be interesting to follow up with these same respondents to find out why they think the relationship strengthens or weakens US national security. I wonder how many of the people giving the response that it strengthens our security are saying this because they think that Saudi Arabia is an “ally” (it isn’t) or because they think that their government is a valuable counter-terrorism partner (it’s a very poor one). Perhaps a future survey could try to find out how much Americans know about how the Saudis and others pass along U.S.-made weapons to third parties, and then ask the question about the Saudi relationship again.

The good news is that at least half of the public recognizes that the U.S.-Saudi relationship makes the US less secure, and there is potential to reach many more Americans that see arms sales to other governments as a danger.

Daniel Larison is a senior editor at The American Conservative, where he also keeps a solo blog. He has been published in the New York Times Book Review, Dallas Morning News, Orthodox Life, Front Porch Republic, The American Scene, and Culture11, and is a columnist for The Week. He holds a PhD in history from the University of Chicago, and resides in Dallas. Follow him on Twitter. This article is reprinted from The American Conservative with permission.

2 thoughts on “Poll: Most Americans Say Arms Sales Make the US Less Secure”