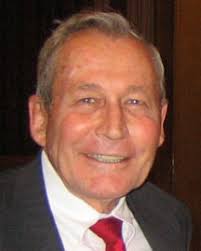 My good friend Jon Basil Utley died on Friday. Jon had been fighting lymphoma for a few years. I believe he was 87. He was one of the sweetest men I ever met. For the last several years, he served as Publisher of The American Conservative magazine and website. Last year, he wrote a brief history of trying to organize conservative opposition to US interventionism.

I met Jon in 1991 when he was organizing the Committee to Avert a Mideast Holocaust, against the first Gulf War. He was very supportive of my efforts in starting Antiwar.com in 1995, and became our first major donor in 1999, and continued to support us generously over the years. He was so genuinely appalled by US wars and committed the latter part of his life to fighting them. He wrote occasionally for Antiwar.com, his articles are available here. Jon was given a lifetime achievement award by The American Conservative last year.

Jon was the son of famous conservative writer Freda Utley and Russian communist economist Arcadi Berdichevsky, a close associate of Joseph Stalin. Jon was born in Russia in the early 1930s. In 1936, Stalin’s police arrested Arcadi. Unable to aid him, Freda left soon after for England with young Jon, using British names and passports. There, she mobilized important leftist friends like George Bernard Shaw, Bertrand Russell, and Harold Laski to try to find Arcadi and even sent a letter directly to Stalin. She received two postcards from Arcadi reporting his five years’ sentence to an Arctic Circle concentration camp for alleged association with Trotskyists. In 1956, she learned he had died on March 30, 1938. She later became a fervent anti-Communist and became an important figure in the US conservative movement.

Jon grew up around prominent conservatives, and became an important part of the movement. When he became disgusted with America’s wars, he used his position within the movement to try to turn them against the wars. Although frustrated with his attempts, he continued to attend meetings and speak out for peace for many years. Jon would often call me and tell me about these endeavors. I usually saw Jon in person about once a year when he would visit California.

In 2004 Jon travelled to Russia and learned that his father was executed by firing squad for leading a hunger strike at the Vorkuta prison labor camp. He was “rehabilitated” posthumously in 1961 under post-Stalin rehabilitation laws. Jon told me that he was able to see files in Russia that included photos of his father and the actual execution order signed by Stalin himself.

I spoke with him a few weeks ago and realized how ill and frail he was getting. I had been trying to reach him every day for the last two weeks and feared the worst. I will so miss talking with him. I will post additional tributes to him in the coming days.

Here is Jon’s biography from The American Conservative website:

Jon Basil Utley is publisher of The American Conservative. Utley is a graduate of Georgetown University’s School of Foreign Service with language studies in Germany and France. He first worked for American International Group insurance in Cuba, Venezuela and Colombia. Later he became a foreign correspondent in South America for Knight Ridder newspapers and for 17 years, starting during the Reagan Administration, was a commentator about third world issues on the Voice of America. He managed an oil drilling partnership in Pennsylvania and later worked in real estate development. He has written for the Harvard Business Review, Washington Post, and other papers. He was formerly founding editor of The Bogota Bulletin, associate editor of The Times of the Americas, and a contributing editor to The Conservative Digest. He was born in Moscow.His father, a Russian trade official, was sent to the gulag and executed at the Brick Quarry in Vorkuta for being one of three leaders of a hunger strike. His mother, Freda Utley, became a prominent anticommunist author and activist.

23 thoughts on “Jon Basil Utley, RIP (A great freedom-fighter and a wonderful friend, I will miss him so much)”