I really do not know how to report Wednesday’s events. Stunning evidence, of extreme quality and interest, was banged out in precis by the lawyers as unnoticed as bags of frozen chips coming off a production line.

The court that had listened to Clair Dobbin spend four hours cross-examining Carey Shenkman on individual phrases of first instance court decisions in tangentially relevant cases, spent four minutes as Noam Chomsky’s brilliant exegesis of the political import of this extradition case was rapidly fired into the court record, without examination, question or placing into the context of the legal arguments about political extradition.

Twenty minutes sufficed for the reading of the “gist” of the astonishing testimony of two witnesses, their identity protected as their lives may be in danger, who stated that the CIA, operating through Sheldon Adelson, planned to kidnap or poison Assange, bugged not only him but his lawyers, and burgled the offices of his Spanish lawyers Baltazar Garzon. This evidence went unchallenged and untested.

The rich and detailed evidence of Patrick Cockburn on Iraq and of Andy Worthington on Afghanistan was, in each case, well worthy of a full day of exposition. I should love at least to have seen both of them in the witness box explaining what to them were the salient points, and adding their personal insights. Instead we got perhaps a sixth of their words read rapidly into the court record. There was much more.

I have noted before, and I hope you have marked my disapproval, that some of the evidence is being edited to remove elements which the US government wish to challenge, and then entered into the court record as uncontested, with just a “gist” read out in court. The witness then does not appear in person. This reduces the process from one of evidence testing in public view to something very different. Wednesday confirmed the acceptance that this “Hearing” is now devolved to an entirely paper exercise. It is in fact no longer a “hearing” at all. You cannot hear a judge reading. Perhaps in future it should be termed not a hearing but an “occasional rustling”, or a “keyboard tapping”. It is an acknowledged, indeed embraced, legal trend in the UK that courts are increasingly paper exercises, as noted by the Supreme Court.

In the past, the general practice was that all the argument and evidence was placed before the court orally, and documents were read out, Lady Hale said.

She added: “The modern practice is quite different. Much more of the argument and evidence is reduced into writing before the hearing takes place. Often, documents are not read out.
“It is difficult, if not impossible, in many cases, especially complicated civil cases, to know what is going on unless you have access to the written material.”

At least twice in the current case, Judge Baraitser has mentioned that the defense gave her three hundred pages of opening argument, and has done so in the context of doubting the need for all this evidence, or at least for lengthy closing arguments which take account of the evidence. She was highly resistant to any exposition by witnesses of their evidence before cross-examination, arguing that their evidence was already in their statements so they did not need to say it. She eventually agreed on a strict limit of just half an hour for witness “orientation”.

However much Lady Hale thinks she is helping by setting down a principle that the documentation must be available, having Patrick Cockburn’s statement online somewhere will never have the impact of him standing in the witness box and expounding on it. What happened on Wednesday was that the whole hearing was collapsed, with both defense and prosecution lawyers hurling hundreds of pages of witness statement at Baraitser’s head, saying: “You look at this. We can get finished tomorrow morning and all have a long weekend to prepare our next cases.”

I was so disappointed by the way the case petered out before my eyes, that the adrenaline which has carried me through must have dried up. Returning to my room at lunchtime for a brief doze, when I tried to get up for the afternoon session I was overcome with dizziness. I eventually managed to walk to the court, despite the world having decided to present itself at a variety of sharp and unusual angles, and everything appearing to be under glaring orange sodium light. The Old Bailey staff – who I should say have been really friendly and helpful to me throughout – very kindly took me up in a lift and through the advocate’s robing room to the public gallery.

I am happy to say that after court two pints of Guinness and a cheese and ham toastie had a substantial restorative effect. Those who have followed these reports will understand how frustrating it was to be deprived of James Lewis asking Noam Chomsky how he can venture an opinion on whether this extradition is politically motivated when he is only a Professor of Linguistics, or whether he has ever published any peer-reviewed articles. To attempt to encapsulate the wealth of information skipped through yesterday is not the work of an evening.

What I shall do for now is give you the eloquent and brief statement by Noam Chomsky on the political nature of Julian Assange’s actions: 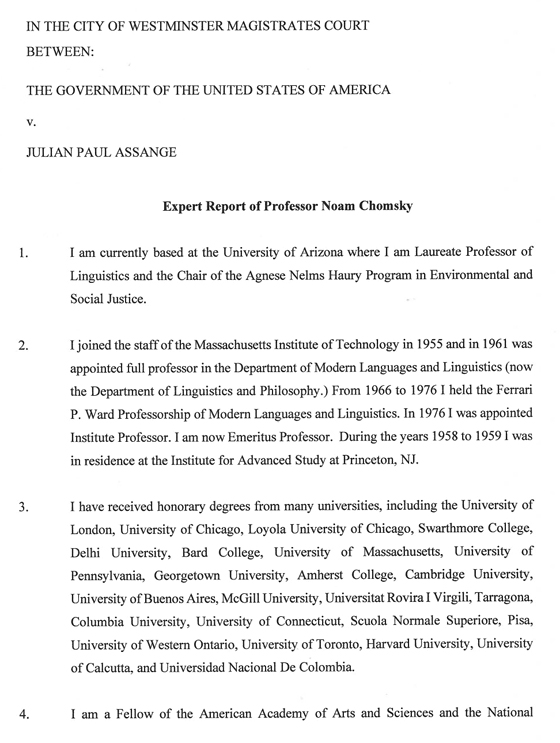 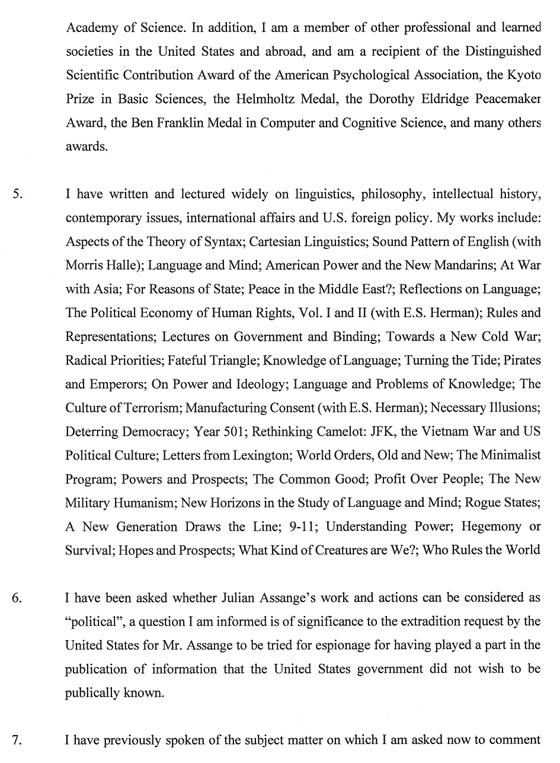 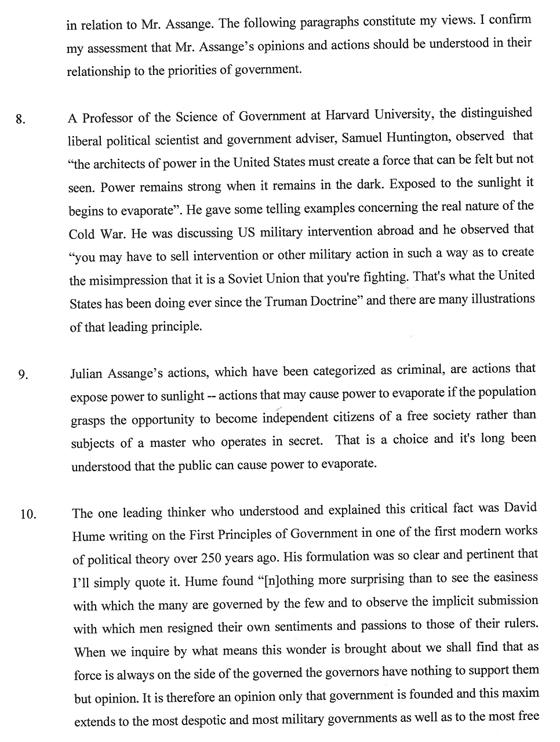 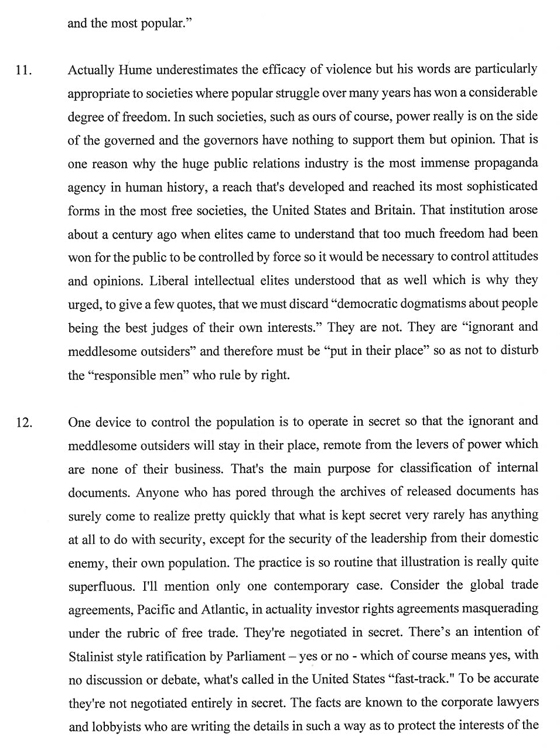 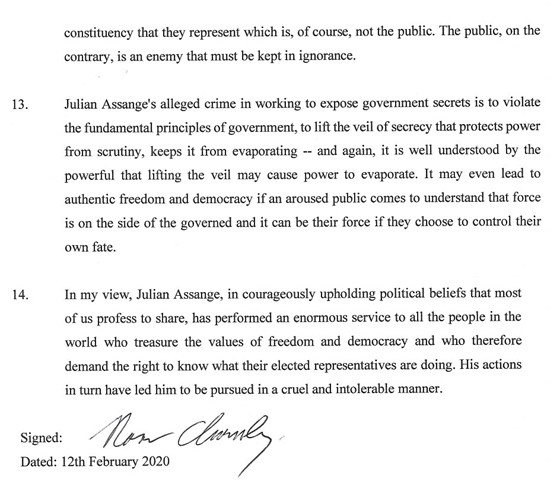 I will also give you the breathtaking testimony of “Witness 2”: 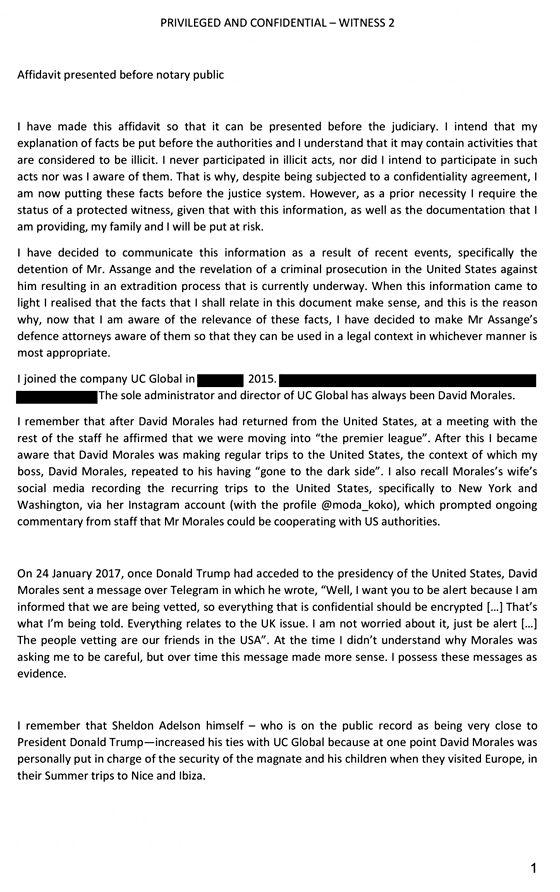 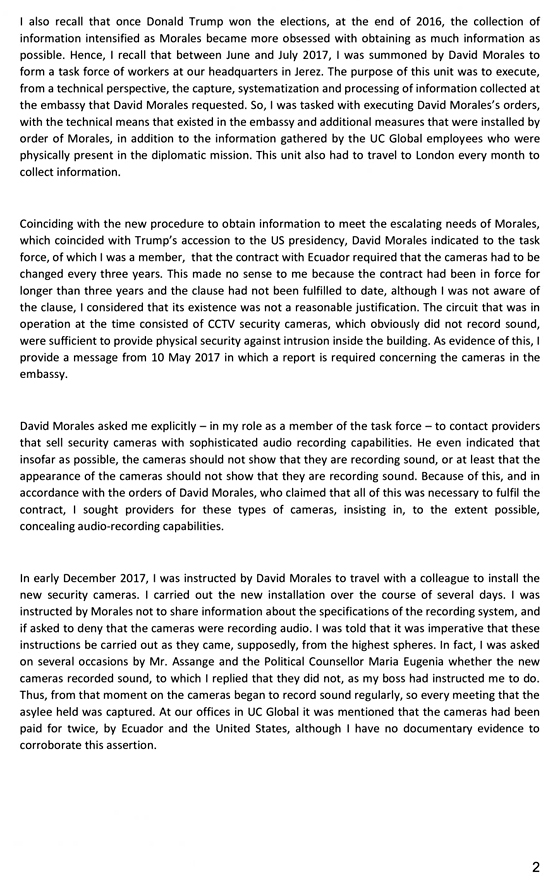 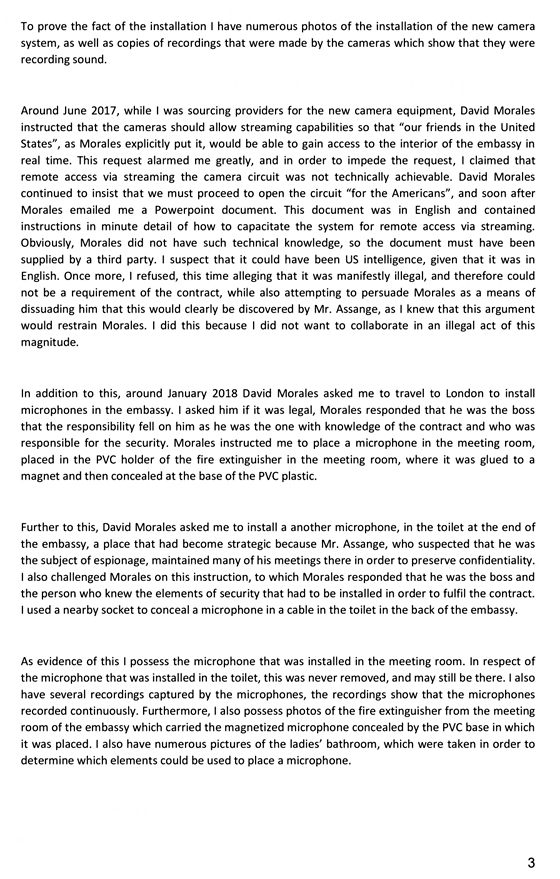 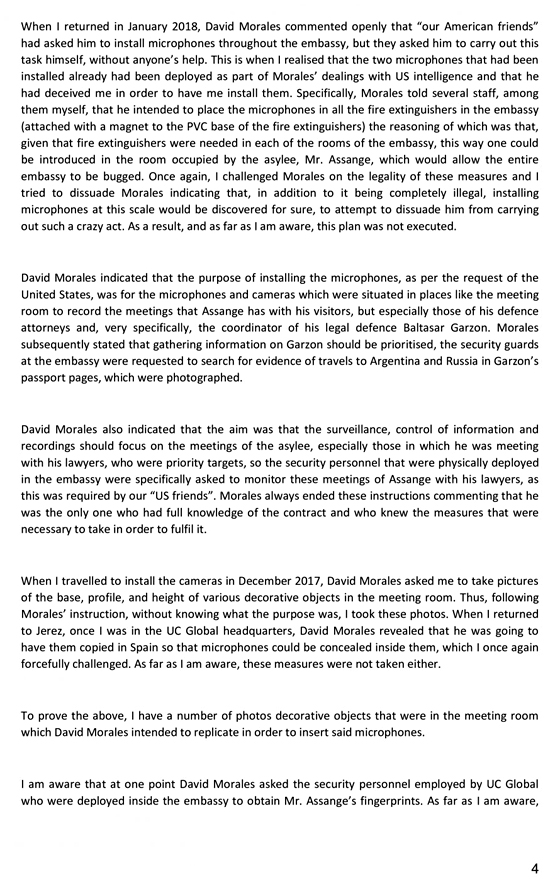 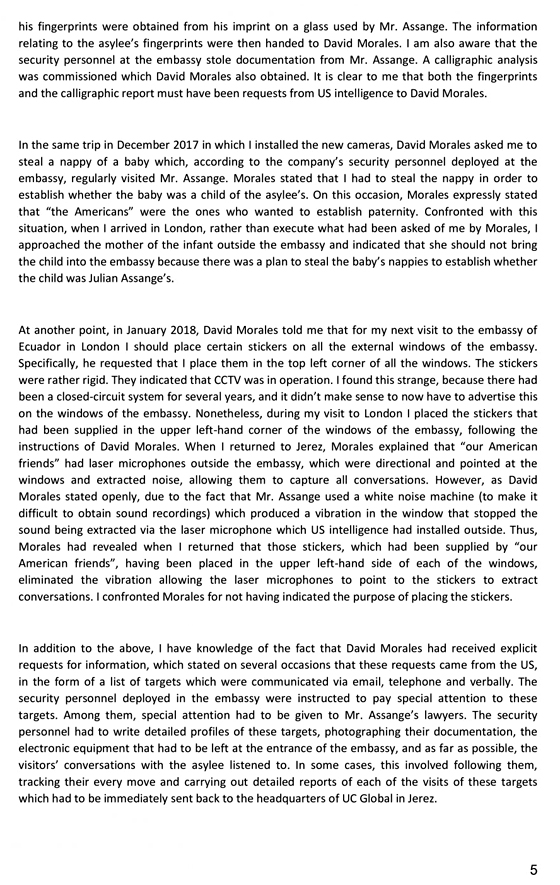 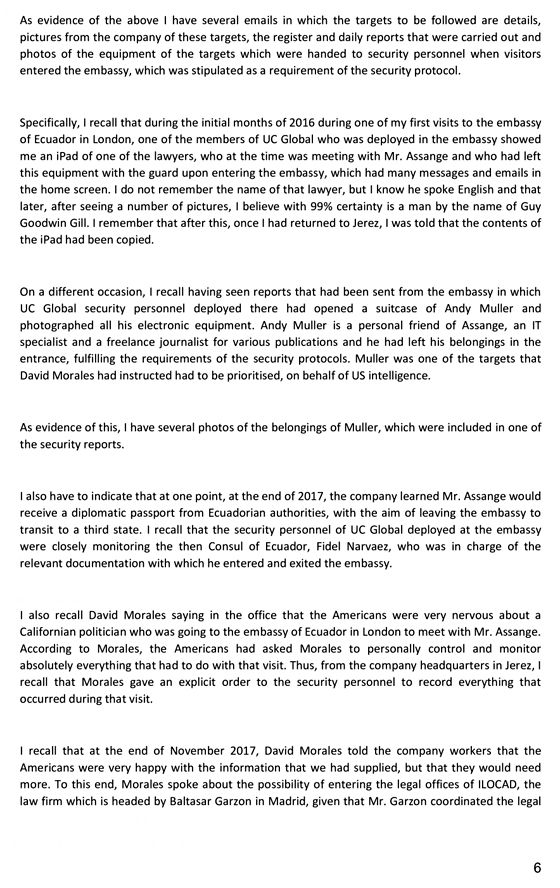 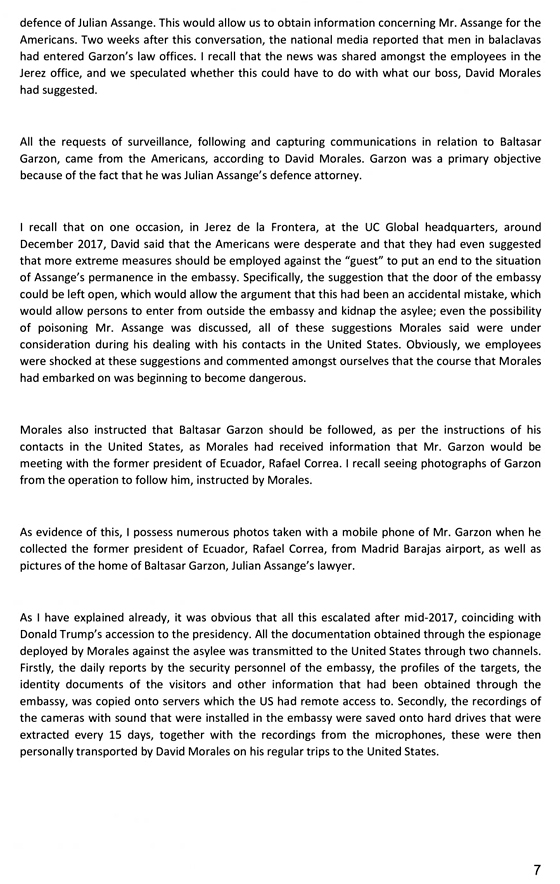 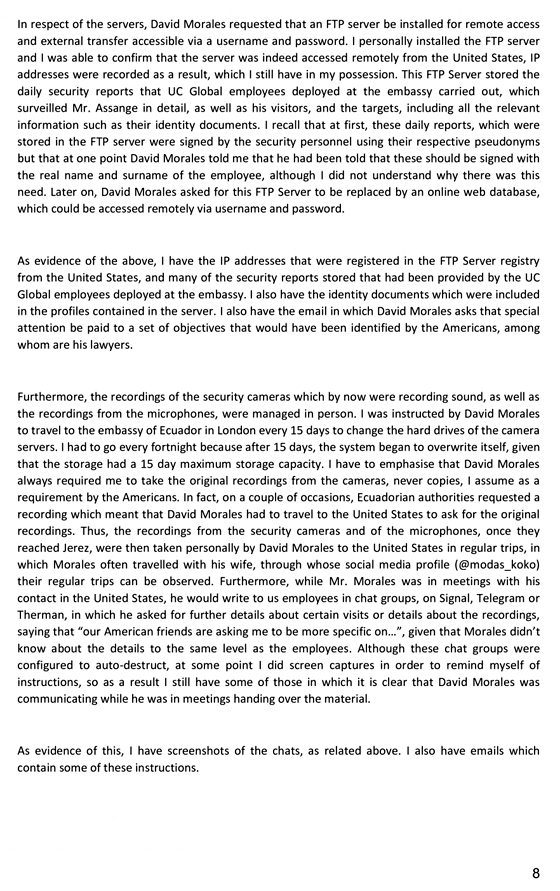 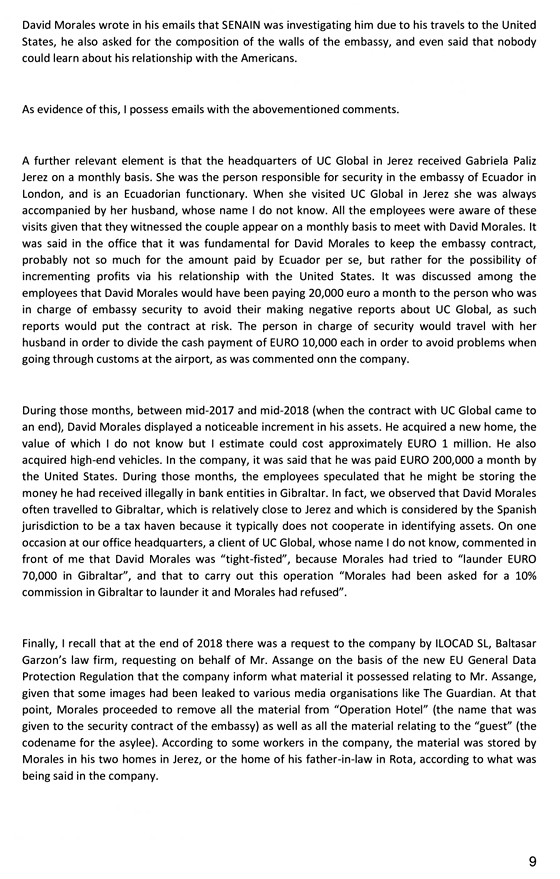 A friend last night gave me the cold comfort that I should not worry about the hurried close of these proceedings reducing the public gaze on the evidence and the arguments (and I think there were altogether nine witness statements yesterday), because that public gaze had been extremely limited, as indeed I have been continually explaining. In other words, it makes no difference. I follow that argument, but it goes against some fundamental beliefs and motivations I have about bearing witness, which I shall need to develop further in my own mind.

In the next few days I will try to bring you a synthesis and analysis of all that passed on Wednesday. Now I need to go to court and see the last few dribbles of this case, and exchange last glances of friendship with Julian for some months.

Craig Murray is an author, broadcaster, human rights activist, and former diplomat. He was British Ambassador to Uzbekistan from August 2002 to October 2004 and Rector of the University of Dundee from 2007 to 2010. The article is reprinted with permission from his website.

12 thoughts on “Chomsky, Cockburn and Worthington Forced To Testify Only in Writing in Assange Case”