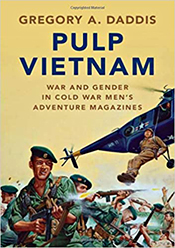 Growing up, I watched a lot of James Bond movies. That super-tough, super-sexy, British secret agent, played with such brilliance by Sean Connery, always seemed to have great fun as he saved the world from various dictators, terrorists, and megalomaniacs. I wanted an Aston Martin like Bond had in “Goldfinger,” tricked out with all the latest gizmos and gadgets provided by Q Branch. But more than anything I wanted Bond’s competence, his swagger, his ability to win the day while getting the girl as well. Such movies are harmless male fantasy flicks – or are they harmless?

While Ian Fleming was writing his “Bond” books and Sean Connery was breathing life and fire into the character, another sort of male fantasy was being promulgated and promoted in men’s adventure magazines with titles like “Stag” and “Man’s Life” and “Man’s World.” These pulp magazines appeared at a time when men’s masculinity was threatened (then again, when hasn’t masculinity been under threat?), in the 1950s and 1960s, a new nuclear age in which America seemed stuck behind the Soviet space program and stuck fighting wars (Korea, Vietnam) that ultimately proved unheroic and unwinnable.

It’s easy to dismiss such men’s magazines as a simplistic variety of pulp fiction, but we’d be wrong to do so, argues historian Greg Daddis in his new book, Pulp Vietnam: War and Gender in Cold War Men’s Adventure Magazines. Daddis is quite convincing in showing how this pulp fiction advanced a view of Western, and specifically American, chauvinism in which war served as an adventure, an opportunity to demonstrate the innate superiority of the American male over various foreign, often Asiatic, opponents, while getting the girl, of course, with the girl usually scantily clad and stereotyped as vulnerable and/or duplicitous and/or sexually available.

Daddis is careful to say that such magazines, with their often violent and sexist fantasies, didn’t drive or determine U.S. behavior in places like Vietnam. But they most certainly reflected and reinforced the idea of American martial superiority and the notion that foreigners, and specifically foreign women, were both inferior and exploitable. The book is well-produced and well-illustrated, including color plates of a representative sample of these magazines. “I’m not afraid of World War III,” “Castration of the American Male,” and “Beat it Sister, I’ve Got a War to Fight!” are a few of the article titles that caught my eye from these pulp covers.

For me, Daddis hits a homerun as he compares the harsh realities of the Vietnam War to the bizarre fantasies of these adventure magazines. If there were US troops expecting lots of easy victories and easier women in ‘Nam, they quickly learned that pulp fiction had nothing to do with hard reality. In Daddis’ words (Daddis, pp. 172-73):

In the macho pulps, brave warriors had fought for honor, for their comrades, for a sense of triumph. In Vietnam, GIs simply wanted to leave the fighting behind … The gaps between truth and fiction seemed insurmountable.

The undiscovered adventure thus generated a lingering sense of anxiety that Vietnam might not be the man-making experience as publicized in the macho pulps. The modern battlefield engendered a sense of helplessness, not heroism …

[M]ore than a few discouraged American soldiers in Vietnam took advantage of wartime opportunities to behave aggressively toward the very people they were there to protect … the pulps played an outsized role in contributing to a portrait of a manly warrior, conquering enemy forces in alien, savage lands, and, frequently, the women who resided there as well. For the men who were schooled by the Cold War pulps, actual experiences in Vietnam proved nothing like what they expected from stories of adventure and domination … [A] climate of deep frustration … might have contributed to violence against Vietnamese people in general and women in particular. After all, had not the macho pulps for years been promising them the sexual rewards of an exotic Orient? 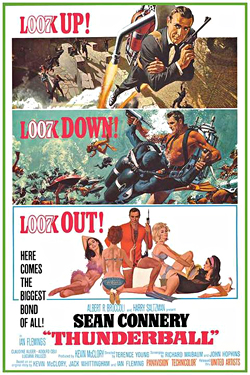 I’d wager that most men recognized the fantastic elements of the pulps – even laughing at some of the more outrageous stories and exaggerated illustrations. But on some level fantasy has a way of informing the reality that we construct out of the cultural material that surrounds us. Sure, I know I’m not James Bond, and I know that real spy work isn’t an adventure-filled romp as in a Bond flick like “Thunderball.” But I still prefer a martini that’s been shaken, not stirred.

The fiction sold by these men’s adventure magazines glorified war and the warrior even as it marginalized and stereotyped and demeaned foreigners of various sorts. Read enough of this stuff (or watch enough Bond flicks) and you’re bound to be influenced by them. Daddis is to be congratulated for writing a highly original study that sheds new light on why Americans fight the way they do, and for what reasons, fictions, and compulsions.

One thought on “Pulp Fiction and the Vietnam War”