Away from the Tory Babel over who will be the top “world-leading” sociopath, I spent the last two evenings in the company of decent people. John and Gabriel Shipton, Julian’s father and brother, were in Glasgow and Edinburgh for the screening of “Ithaka”, the documentary that follows the fight by Julian Assange’s family to have him freed. I was moderating the Q & A.

The odd pub may also have been visited.

Ithaka is heart-rending, and it has an important message in rehumanizing Julian after over a decade of concerted (I use that word advisedly) propaganda aimed at dehumanizing him. The sheer baseness of the extraordinary lies told by the mainstream media about his personal hygiene – leaving toilets unflushed and even smearing Embassy walls with excrement – is something straight out of Goebbels’ playbook.

The cold calculation behind Assange’s treatment in his last months in the Embassy, when he was denied access to wash and shave, in order to produce the apparent monster for the photos of his arrest, is a true example of evil unfolding.

Two days before his expulsion I telephoned the Embassy and spoke to the First Secretary (a call I recorded). I explained that if, as we understood, Julian were no longer welcome, they only had to say so and he would leave voluntarily to the police station. Instead we had that calculated piece of theater.

Presentation aside, it also enabled them to retain all of Julian’s possessions, including all his legal papers covered by client-attorney privilege relating to his defense. As we heard in the extradition hearing, all of those papers were taken to Quito and then given to the CIA. This was admitted by counsel for the US government who claimed that “Chinese walls” – a direct quote – within the US government prevented the CIA from passing any of that information to the Justice Department, who are running the case.

If you believe that, I have a bridge to sell you. But the fact is that it is the US Government who is applying for extradition and the US Government has stolen the legal papers of the other party in the case. In any other case this would lead to the case being kicked out immediately.

If you add that together with the fact that the extradition treaty specifically bars political extradition, that the US government’s key witness is a convicted fraudster and pedophile who was paid for his evidence (which he has since denounced), and that no journalist in the US has ever been charged with Espionage before, you begin to start to understand the depth of state depravity that has kept Julian in the UK’s strongest security prison for four birthdays.

I found this curious. Mike Pompeo, former US Secretary of State, who oversaw the plot to kidnap or potentially assassinate Julian in the Ecuadorean Embassy, called on Priti Patel on 30 June, just after she signed Julian’s arrest warrant and also just after Pompeo had been summoned by a Spanish court to give evidence on the plot. 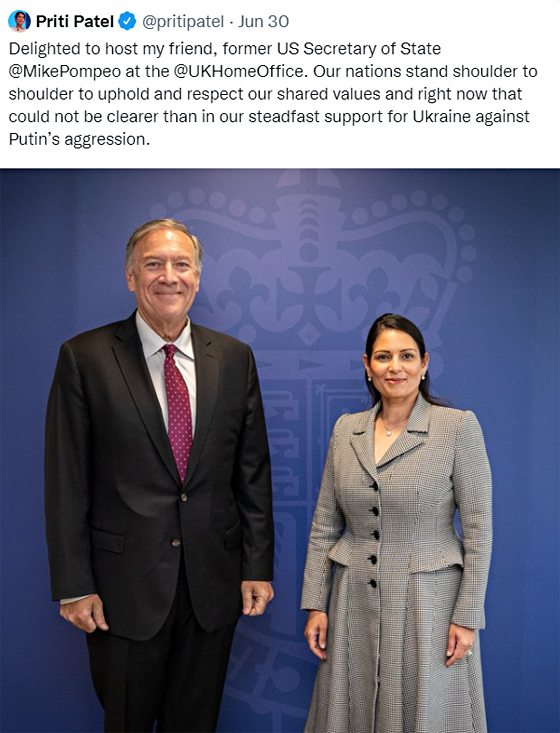 That photo is more unusual than might be immediately realized. With a Democrat in the White House, it is extremely rare for a senior British cabinet minister, acting in an official capacity, openly to flaunt friendship with senior Republicans from the defeated administration, and to hold official meetings with them.

Pompeo is now a private citizen. He could quite naturally be meeting Patel as a friend in her home – but officially, at the Home Office? This is really not done, or if exceptionally needed, it is done quietly.

What did they discuss in the Home Office?

Here is something else downright peculiar. According to the Wall Street Journal, Priti Patel asked the US government to give her public congratulations for agreeing the extradition of Julian Assange:

There is a very strange smell surrounding this extradition.

The film Ithaka is not a dissection of the legal issues, nor an in-depth recounting of the Assange case. It rather focuses on the devastating effect of his cruel imprisonment on his family, both his wife and children, and on his father John Shipton.

John’s personal crusade to save his son is the main focus. The insight into the fundamentals of the case – that the man who did most to expose war crimes is the man locked up and tortured, not the people who committed the war crimes – mostly come from interviews with Professor Nils Melzer, then UN Special Rapporteur on Torture.

Do go see the film – which has had excellent reviews from mainstream film critics. Chairing the Q&A sessions afterwards I have been struck by the number of tear-stained eyes when the lights go up, and the audience mood shifts from sorrow to anger fairly quickly. It is a remarkable film.

Let me give my own insights. As a technical bit of film-making, it is edited down from what must have been thousands of hours of footage. During the various stages of extradition hearings I was personally miked up every single day for the film for a total of over five weeks. Tens of hours of conversation between John and myself were recorded, not one second of which made it into the film.

That is absolutely not a complaint, you see more than enough of me. It is merely an illustration on the remarkable technique of editing down on this film. Over a thousand hours were left on the cutting room floor to get down to just two in the film.

That of course gives the director, Ben Lawrence, and his editor massive ability to shape the narrative by selection. Ben has chosen to illustrate the bleakness of Julian’s isolation by emphasizing the loneliness of John and Stella’s quest. I am sure that is artistically valid and it presents a real truth – nobody can truly share the despair of the family, and in the long dark night of the soul they are alone.

But I do wish to assure you that the families are surrounded and supported by a group of really loving and caring people, very much more involved than I am. They are not foregrounded in the film for reasons of narrative selection, but they exist and they know they have the eternal gratitude of Julian and his whole family and many of the rest of us.

I would further add that John Shipton’s eclectic mind and deeply philosophical nature are brought out wonderfully, but his immense charm and also his great pleasure in social company perhaps do not come across on the screen. Ben has focused on the more angular bits of John’s nature.

None of that in any way detracts from the experience of a superb film by Ben Lawrence, produced by Julian’s quieter but very talented brother Gabriel. Undoubtedly the public perception has already been turning in Julian’s favor. Don’t just go see the film: take somebody who might have their eyes opened to the truth.

Craig Murray is an author, broadcaster, human rights activist, and former diplomat. He was British Ambassador to Uzbekistan from August 2002 to October 2004 and Rector of the University of Dundee from 2007 to 2010. The article is reprinted with permission from his website.

8 thoughts on “Ithaka: A Family’s Fight To Free Julian Assange”