Via Juan Carlos Hidalgo at the blog for the Cato Institute, this graph illustrates how Mexican President Felipe Calderón’s militarized approach to the drug war not only didn’t quell the violence, but reversed the downward trend that had been going on for over a decade. 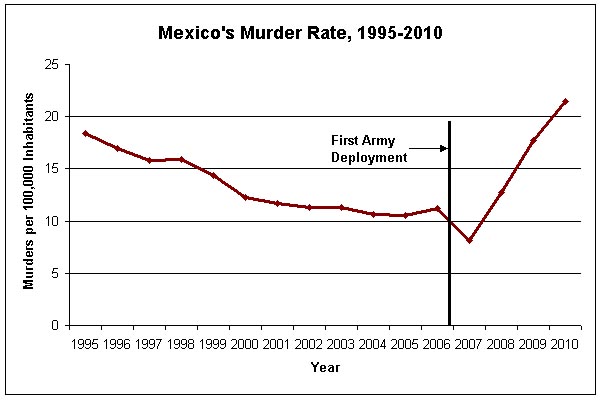 source: Global Study on Homicide 2011, United Nations Office on Drugs and Crime
And now, of course, the violent drug cartels are as dominant as ever. Mr. Hidalgo informs us that now the new president-elect in Guatemala, “Otto Pérez Molina, has promised to deploy the army to fight organized crime,” even explicitly citing “Felipe Calderón’s lead in declaring an all out war against drug cartels.” This, despite the fact that, as he writes, ” instead of placating violence, the deployment of the army helped to magnify it.”

So, what’s the U.S. role in this? Well, as President of Mexico, Calderón has received a large amount of U.S. support, and in fact that support increased sharply after he began his all-too-literal war in his own country. As I wrote about recently, the 50,000 Mexican troops and thousands more federal police officers that Calderón unleashed on the streets to fight the cartels were and are trained and supported by the United States. “George W. Bush backed Calderón’s militarization with a $1.8 billion package of helicopters, police training, and intelligence cooperation,” wrote The New Yorker’s Steve Coll recently. “Obama has continued the program” and “has reportedly sent drones to help Mexico track cartel leaders and traffickers.” And Human Rights Watch just released a report detailing Mexico’s U.S.-supported security forces participating in “more than 170 cases of torture, 39 “disappearances,” and 24 extrajudicial killings since Calderón took office in December 2006.”

The United States has been pushing a military approach to the drug war for a long time. Similarly violent approaches have failed miserably in Colombia, and now there is much news about Honduras being a war zone for paramilitaries and the Drug Enforcement Administration.

In Guatemala, the government is also receiving a significant slice of U.S. booty. There, the drug war is ravaging the society, and as entrepreneur and educator Giancarlo Ibarguen recently told Reason.tv, “the war on drugs in the United States [is to blame] for what is happening here in Guatemala.” Despite the Guatemalan military’s ties to drug gangs, State Department diplomats keep calling for more of the same militarized approach. Dialogues in WikiLeaks cables have reveal talk of Guatemala as “an embryonic Colombian situation” which “requires greater assistance.”

I’m with Cato’s Hidalgo here: the new Guatemalan president should not follow the same destructive policies as Mexico. But with all this U.S. influence, I’m afraid we’re in for it anyways.