I made a mistake and rush to correct it. The photo of the Afghan mujahadin does not include Gulbuddin Hekmatyar because, contrary to my contention in this post, he did not meet with Ronald Reagan in the White House. It was not for lack of an invitation, however. In fact, it was Hekmatyar who spurned the White Houseâ€™s invitation. 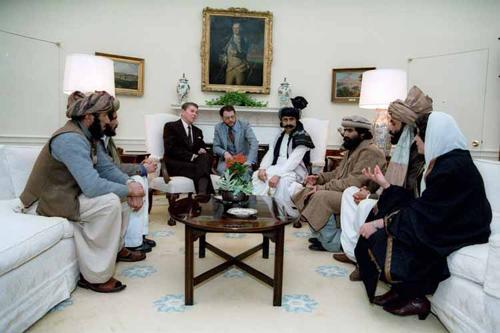 Hekmatyar came to the U.S. in 1985 as part of a delegation of mujahadin leaders to lobby diplomats at the U.N. General Assembly. Despite enormous pressure by Pakistanâ€™s Inter-Services Intelligence (ISI), which channeled a disproportionate amount of CIA and Saudi covert aid to him, Hekmatyar reportedly refused to meet with Reagan, arguing that any â€œpalling aroundâ€ with the leader of the Free World would be used by the Soviet Union and the Afghan secret police, the KHAD, to discredit his nationalist and religious credentials.

This doesnâ€™t undermine the central point of the post, however: Reagan had intended to publicly meet with and presumably praise Hekmatyar as a â€œfreedom fighterâ€ â€” the moniker he used to describe the mujahadin depicted in the photo â€” at the White House and had invited him there for that purpose. But it was Hekmatyar, whose use of terrorism over more than three decades is undisputed, who turned Reagan down.

A propos, did anyone notice the elevation (due in major part to pressure from western embassies in Kabul, according to the New York Times) of a former KHAD special forces officer, Hanif Atmar, to head the Interior Ministry under President Hamid Karzai? What goes around comes around; one manâ€™s terrorist is another manâ€™s freedom fighter. In any event, I apologize for the mistaken identity.

21 thoughts on “Correction: The Terrorist Refused to ‘Pal Around’ With Reagan.”