In June, the Army negotiated a first-of-its-kind sponsorship deal with the producers of “X-Men: First Class,” backing it up with ads telling potential recruits that they could live out superhero fantasies on real-life battlefields. Then, in recent days, word leaked that the White House has been working with Oscar-winning director Kathryn Bigelow on an election-year film chronicling the operation that killed Osama bin Laden.

A country questioning its overall military posture, and a military establishment engaging in a counter-campaign for hearts and minds — if this feels like deja vu, that’s because it’s taking place on the 25th anniversary of the release of “Top Gun.”

That Jerry Bruckheimer blockbuster, made in collaboration with the Pentagon, came out in the mid-1980s, when polls showed many Americans expressing doubts about the post-Vietnam military and about the constant saber rattling from the White House. But the movie’s celebration of sweat-shined martial machismo generated $344 million at the box office and proved to be a major force in resuscitating the military’s image.

Not only did enlistment spike when “Top Gun” was released, and not only did the Navy set up recruitment tables at theaters playing the movie, but polls soon showed rising confidence in the military. With Ronald Reagan wrapping military adventurism in the flag, with the armed forces scoring low-risk but high-profile victories in Libya and Grenada, America fell in love with Maverick, Iceman and other high-fivin’ silver-screen super-pilots as they traveled Mach 2 while screaming about “the need for speed.” 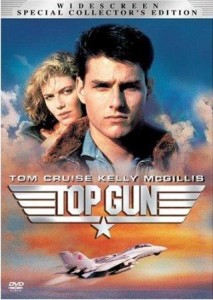 The high-flying hardware turns Top Gun into a 110-minute commercial for the Navy — and it was the Navy’s cooperation that put the planes in the picture. The producers paid the military $1.8 million for the use of Miramar Naval Air Station near San Diego, four aircraft carriers and about two dozen F-14 Tomcats, F-5 Tigers and A-4 Skyhawks, some flown by real-life top-gun pilots. Without such billion-dollar props, the producers would have spent an inordinate amount of time and money searching for substitutes, and might not have been able to make the movie at all.

The partnership has been profitable for both Hollywood and the Pentagon. Top Gun, which has raked in $160 million so far at the box office, is the year’s highest-grossing film. Its glorified portrayal of Navy life spurred theater owners in such cities as Los Angeles and Detroit to ask the Navy to set up recruiting exhibits outside cinemas where Top Gun was playing to sign up the young moviegoers intoxicated by the Hollywood fantasy….

But there is a catch. Before a producer receives military assistance for a TV or movie project, the screenplay is reviewed by officials at the Department of Defense and by each of the services involved. The Pentagon ends up rejecting many projects that come its way on the grounds that they distort military life and situations. An Officer and a Gentleman, which like Top Gun dealt with naval aviation training, was turned down because of its rough language, steamy sex and, to the military mind, inaccurate view of boot camp. The Pentagon said no to WarGames because the military contends that a teenage computer hacker could never crack the U.S. strategic defense system. Even Rambo’s lone-wolf heroics would have failed to pass muster, despite later praise from President Reagan. The Pentagon guidelines do not condone “activities by individuals . . . which are properly the actions of the U.S. Government.”

2 thoughts on “You Can Be My Wingman Any Time”