As far as tonight’s presidential debate is concerned, the proceedings are largely predictable, especially since the topic is exclusively foreign policy. In the first two debates, the candidates barely spoke about foreign policy – mindful, probably, that only about 4% of likely voters consider it an important topic. 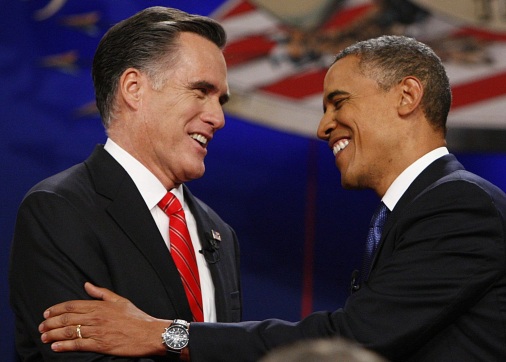 One reason it is predictable is because of how these debates are executed: formats are planned, moderators are chosen, issues are predetermined. These debates must be arranged as such, otherwise it will be difficult for the candidates to accomplish their goal: to spend 90 minutes reciting well-rehearsed lies and distortions.

The moderator will be Bob Shieffer, who is enough of a stalwart hawk to be so completely blinded by his imperial biases that he incredulously quibbled with Ron Paul last year against the claim that the 9/11 terrorists were motivated by brutal US foreign policy and not by our coveted freedoms. The fact that the CIA, the State Department, the FBI, and all of the academic literature ever written on the subject are in consensus on this issue did not deflate Sheiffer’s intransigence.

Another reason it is predictable is because Americans got something of a preview during the vice presidential debates a couple weeks ago. Vice President Joe Biden and contender Paul Ryan spent a fair amount of time on foreign policy issues and what was clear was that both candidates appeared to argue over everything, but on every substantive issue – including defense spending, Afghanistan, Syria, and Iran – there was no discernible difference in policy between the two.

And we can expect that to be the case tonight as well, for the most part. The punditry are saying this morning that Mitt Romney is expected to lose. This is primarily because he and many other Republicans aim to be on the hawkish side of the foreign policy issues, talking about American military might and ruthless global dominance. But they have found it difficult to go further to the right than President Obama. There’s no room for Romney to be more of a hawk than Obama, and he’s certainly not going to criticize him for being too willing to bomb other countries or expand American military presence around the world.

Here are five issues, central to US foreign policy, that will not be addressed in tonight’s debate:

The (il)legitimacy of the drone war: The administration is in direct violation of several domestic and international laws in its drone war. They have invented a definition of “imminence,” a required element for justifying the use of force for self-defense in international law. They’re ignoring a Reagan-era statute that bans extra-judicial assassinations. And they appear to be violating the decision of the Supreme Court in Hamdi v. Rumsfeld, which said due process must be “accorded to a US citizen deprived of liberty in connection with hostilities (this was ignored, for example, when the administration targeted and killed three US citizens without due process, including a 16-year old boy).

For these and other reasons – like the fact that the drone war in Pakistan and Yemen kills and terrorizes civilians – at least two UN investigators have called the legality of Obama’s drone wars into question. Christof Heyns, UN special rapporteur on extrajudicial, summary or arbitrary executions called on the Obama administration to explain under what legal framework its drone war is justified and suggested that “war crimes” may have already been committed. The UN human rights chief Navi Pillay also called for a UN investigation into US drone strikes in Pakistan, noting their questionable legality and that they indiscriminately kill innocent civilians.

The failure and cruelty of the Iran sanctions: While Iran will certainly be talked about, the issue of sanctions will only range from harsh to harsher. What will not be discussed is the fact that sanctions have historically failed to change the policies of the targeted regime, and indeed appear to be failing to change the Iranian regime’s policies as well. Especially ignored will be the horrible humanitarian consequences that have already begun to manifest in Iran: The Charity Foundation for Special Diseases, a non-governmental medical organization supporting six million patients in Iran, has warned publicly that the sanctions are putting millions of lives at risk by causing deep shortages of medicines for diseases like hemophilia, multiple sclerosis and cancer.

“The sanctions imposed on the Islamic Republic of Iran have had significant effects on the general population,” UN Secretary General warned in a statement earlier this month, “including an escalation in inflation, a rise in commodities and energy costs, an increase in the rate of unemployment and a shortage of necessary items, including medicine.”

“The sanctions also appear to be affecting humanitarian operations in the country,” he wrote. “Even companies that have obtained the requisite licence to import food and medicine are facing difficulties in finding third-country banks to process the transactions.”

This, all while the consensus view in the entire US and intelligence community is that Iran has no nuclear weapons and has not made the decision to begin to develop nuclear weapons, which they are years away from technologically anyways.

Government secrecy and surveillance powers: Despite rhetoric to the contrary, the Obama administration has led one of the most secretive, over-classified, and surveillance-prone governments in a long time – maybe ever. And again, Romney would only try to appear less transparent, so this topic will not be discussed tonight.

In 2011, the federal government spent $11 billion just on keeping secrets from the American public (this number did not include costs incurred by the CIA and the NSA and other spy agencies, because those figures are classified). The worst of government secrecy has occurred under the Obama administration, which has hailed itself as the most transparent administration ever. According to the Information Security Oversight Office (ISOO), the government made a whopping 76,795,945 classification decisions in 2010, an increase of more than 40% from 2009. Document reviews conducted by ISOO in 2009 discovered violations of classification rules in 65% of the documents examined, with several agencies posting error rates of more than 90%.

The Obama administration has fought tooth and nail to keep the details of its surveillance activities hidden from the public. But documents recently released by the Justice Department after years of litigation with the ACLU have revealed that “federal law enforcement agencies are increasingly monitoring Americans’ electronic communications, and doing so without warrants, sufficient oversight, or meaningful accountability.” Homeland Security has also recently been found to have illegally spied on peace activists.

The idiocy of aiding the Syrian rebels: The conflict in Syria has primarily been framed by both parties as a humanitarian crisis that America is morally obligated to intervene in militarily. What most Americans don’t know – and won’t find out at tonight’s debate – is that the rebel fighters that the US is aiding and helping send arms to have committed war crimes and are increasingly fighting under the banner of al-Qaeda groups intent on setting up a Salafi Islamist state if the Assad regime falls. The US military and intelligence community is aware of these concerns, but still the Obama administration has not stopped the aid, which is by most expert accounts only serving to prolong the conflict and worsen the humanitarian situation. The Romney campaign agrees with this policy, but has hinted that it would try to get more weapons to these al-Qaeda fighters if elected. This has blowback written all over it.

US-backed Israeli crimes against the Palestinians: Simply put, US economic, military, and diplomatic support of Israel enables the Israeli leadership to commit blatant crimes, in direct violation of international law. The Likud Party, now in power in Israel, currently receives $3 billion a year from Washington and all the vetoes the UN Security Council can take. But the Likud Party Charter declares Jewish settlement in the West Bank and Gaza as “the realization of Zionist values” and describes the whole of the West Bank and Jerusalem as belonging to Israel. This not only goes directly against official US support for a negotiated two-state solution, but it violates international law prohibiting forced relocation of occupied people and the settlement of conquered or occupied lands.

The strictly-imposed Israeli blockade on Gaza, also, violates international law prohibiting collective punishment and is creating a humanitarian crisis in the small strip. Recently released documents show that the Israeli military meticulously and callously calculated the number of calories Gaza residents would need to consume in order not to starve, and used those calculations to inform how to impose a harsh economic blockade, as if Gaza residents were dogs in a cage. But this is a banished issue, and will not be mentioned at tonight’s debate.