In last night’s presidential debate, Romney walked a narrow line of fundamentally agreeing with President Obama on key foreign policy issues while trying to seem tougher. At the same time, he tried to avoid being boxed in as pro-war by Obama, saying things like “We don’t want to get drawn into a military conflict,” and “we can’t kill our way out of this mess.”

Republican voters might criticize Romney for so eagerly escaping the hard-nationalist, pro-war label, but Romney’s decision here was politically shrewd, as the fickle, fluctuating Massachusetts Governor so often is. He understands what Pat Buchanan pointed out last week: the perceived peace candidate tends to win. 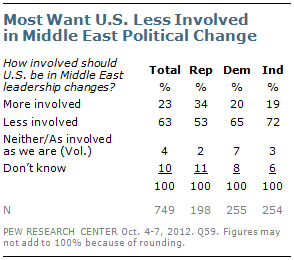 Pew Research Center, for example, found this week that a large majority, 63 percent, want the US to be less involved in the Middle East’s political changes. This is a precept that is simply out of the question for policymakers, including the president.

Truth be told, outside of the election in two weeks, the public is wholly ignored in foreign policy-making. This 2005 study from American Political Science Review assessed multivariate foreign policy preferences and their influence on actual policy, considering business, elite opinion, labor, and the general public. It found that business interests along with elite opinion within the foreign policy establishment basically dictate foreign policy.

The strongest and most consistent results are the coefficients for business, which suggest that internationally oriented business corporations are strongly influential in U.S. foreign policy…Business people (along with experts) are estimated to exert the strongest effects on policy makers overall and, especially, on administration officials…

And as for the public, the researchers favored their models to account for possible miscalculations in their models’ emphasis in popular opinion:

Even with these reduced and refined models, the public does not appear to exert substantial consistent influence on the makers of foreign policy…A more plausible interpretation of these borderline-signifcant coefficients, however, is that the public simply has no effect at all…In general, public opinion takes a back seat to business and experts.

This is par for the course. States have always been self-serving institutions with the aim of furthering their own power and control, in conjunction with their collaborators in the corporate world who benefit from the state capitalist system. Charles Tilly, author of Coercion, Capital and European States, described war as primarily “a means of satisfying the economic interests of the ruling coalition by gaining access to the resources of other states.”

And that’s how it will stay with regard to foreign policy, even if both candidates try to portray themselves as the peace candidate. Meanwhile, both parties desperately maintain our empire, hegemony, and coercive capabilities abroad. The public is a little less interested in that, because it primarily serves the interests of the state, not the people.

3 thoughts on “Obama, Romney Pandering to a Less Interventionist Public (For Now)”