The second installment of the Washington Post‘s investigation into the Obama administration’s drone war is as important as the first, Greg Miller’s piece which revealed the “disposition matrix,” and which I discussed here. But this article, written by Karen DeYoung, descends into a character piece on John Brennan, Obama’s counter-terrorism adviser who spearheads the targeting process of the drone wars. Brennan is presented towards the end as deeply concerned with transparency and the ethical and legal implications of the drone wars: 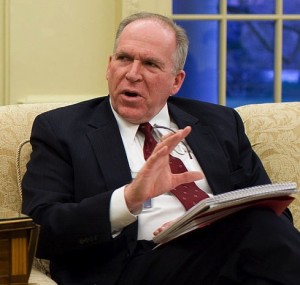 One official said that “for a guy whose reputation is focused on how tough he is on counterterrorism,” Brennan is “more focused than anybody in the government on the legal, ethical and transparency questions associated with all this.” By drawing so much decision-making directly into his own office, said another, he has “forced a much better process at the CIA and the Defense Department.”

Clearly there are some problems with this interpretation, and we know what they are. But DeYoung sets readers up for a powerful concluding thought:

Even if Obama is reelected, Brennan may not stay for another term. That means someone else is likely to be interpreting his playbook.

“Do I want this system to last forever?” a senior official said. “No. Do I think it’s the best system for now? Yes.”

“What is scary,” he concluded, “is the apparatus set up without John to run it.”

So leaving aside the characterization of team Brennan-Obama as ethically-minded warriors inclined towards transparency, it is quite easy to envision a future administration which is far less ethical, far less transparent, and far more brutal in their execution of the drone war apparatus that they set up. This has been a common question from the beginning: what kind of precedent has the Obama administration set, and how will a future Luca Brasi in a future presidential administration use these powers to kill?

50 thoughts on “The Danger of Precedents”