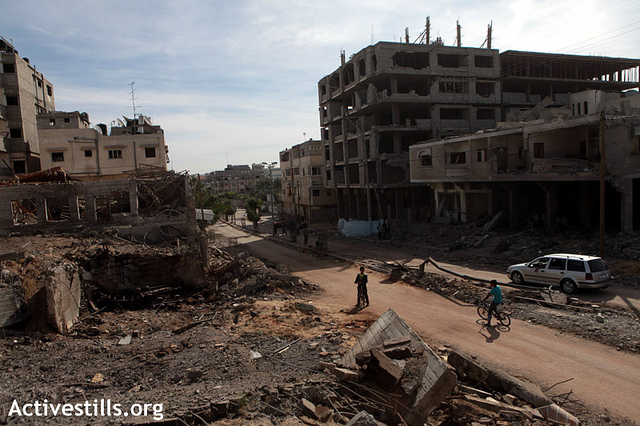 The Israeli decision to rain death and destruction on Gaza, to use lethal weapons of the modern battlefield on a largely defenseless civilian population, is the final phase in a decades-long campaign to ethnically-cleanse Palestinians.

Israel uses sophisticated attack jets and naval vessels to bomb densely-crowded refugee camps, schools, apartment blocks, mosques, and slums to attack a population that has no air force, no air defense, no navy, no heavy weapons, no artillery units, no mechanized armor, no command in control, no army… and calls it a war. It is not a war, it is murder.

When Israelis in the occupied territories now claim that they have to defend themselves, they are defending themselves in the sense that any military occupier has to defend itself against the population they are crushing. You can’t defend yourself when you’re militarily occupying someone else’s land. That’s not defense. Call it what you like, it’s not defense.”

Contrary to how it is being portrayed, aggression does accurately describe what Israel is doing. Israel initiated this conflict. Israel had several opportunities to pacify the situation and re-establish a cease-fire, and chose instead to escalate. Civilian and government infrastructure is being targeted. As of the time of this writing, the number killed in Gaza has surpassed 80, 22 of them children, 9 of them elderly; 709 have been wounded, 230 of them children, 50 elderly. Three Israelis have been killed by Hamas rocket-fire.

Obama is still acting as a vocal advocate of Israel’s actions in Gaza. And Israel continues attack Gaza with an impunity granted them by American tax dollars, American support, American depravity.