“It is not written in our hearts, it is carved in our hearts.” I awoke this morning still shaken with these words in my head.

Yesterday I was in Ramadi and Fallujah. Instead of bringing a message of caring, of empathy for their suffering and a desire for peace, my presence as someone from the U.S, seemed to open wounds that are unfathomably deep. 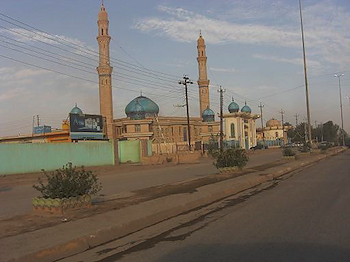 I sat in on a lecture, given in English, to maybe fifty or more young men and women at a college in Ramadi. They were all about 22 and 23 years of age, in their last year of a 5-year program. That means they were about 13 or 14 years old during the U.S. led invasion and beginning of the occupation. I was invited to speak by the president as an “honored guest” after the lecture. To my embarrassment the professor graciously hurried through his lecture on my account. I had everyone’s attention. It was awkward for me, and after introducing myself, I said I would be grateful to hear from them. There was only silence. I am sure my words sounded empty, trite and artificial.

Then a young man in the front row only a couple of feet from me said in a quiet voice “We have nothing to say. The last years have been only sad ones.” Again there was silence.

Sami, my host from Najaf and part of the Muslim Peacemaker Team, stood and shared. He told the story of how, after the U.S. bombing assaults on Fallujah, he and others came from the Shia cities of Najaf and Karbala, to carry out a symbolic act of cleaning up rubble and trash in the streets of Fallujah. This gesture, he said, melted hearts and healed some of the brokenness between Sunni and Shia. He
spoke of the delegation of peacemakers from the United States who were just in Najaf for twelve days, of the work to build bridges and seek reconciliation.

Someone asked, “Why did you this? What did we do to you that you would do this to us?”

“Iraqis cannot forget what Americans have done here,” said another. “They destroyed the childhood. You don’t destroy everything and then say ‘We’re sorry.’ “You don’t commit crimes and then say ‘Sorry.’”

“To bomb us and then send teams to do investigations on the effects of the bombs…No, it will not be forgotten. It is not written on our hearts, it is carved in our hearts.”

We are happy to make bridges between people, said the president of the college, but we will not forget. What can you do? In Fallujah 30% of the babies are born deformed.” What can you do?

He spoke of how he’d met an American soldier in the airport. He was part of the Special Forces in Iraq. The soldier told him “The bible tells us not to kill. But we were taught to kill, to kill for nothing. Just kill. I am so sorry.”

“Build bridges? the president repeated. Apologize? he said. What can you do?” There was no rancor in his tone or demeanor, only anger and deep pain.

A young man said….The U.S. is still here. There are fifteen thousand people at the U.S. embassy in Baghdad. [and 5,000 security personal to protect them]. They have their collaborators. The war is not over.

We later visited a Sheik in Fallujah in his home. He and Sami embraced warmly and he welcomed us into the sitting area. In the course of our sharing we spoke of our visit to nearby Ramadi, of what was said there. “War always results in two losers,” he said sorrowfully.

Cathy Breen works with Voices for Creative Non-Violence and is a Catholic Worker at Mary House in New York City. She lived in Iraq prior to the U.S. invasion in 2003 and during the occupation.

104 thoughts on “‘Iraqis cannot forget what Americans have done here’”