In the Shiite neighborhoods of Sitra in Bahrain, these posters are reportedly all over the place: 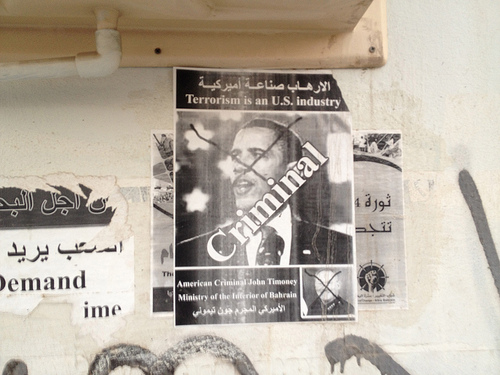 The picture on the bottom right-hand corner is John Timoney, the ex-US police chief whose expertise was tapped by the US-backed Bahraini dictatorship to crack down more efficiently on peaceful protesters.

The Obama administration, contrary to its own propaganda about being on the side of the people in the Arab Spring, has continued to lend economic, military, and diplomatic support to the tiny Persian Gulf monarch throughout its brutal repression of peaceful demonstrators since early 2011, when forty-seven unarmed protesters were shot and killed with live rounds by security forces.

The Bahraini regime hosts the US Navy’s Fifth Fleet, which allows the United States to “project power” in the Persian Gulf and patrol the Straits of Hormuz, through which 40 percent of the world’s seaborne oil passes. That ruthless geo-political advantage is not something the Obama administration is willing to give up for the sake of democracy and human rights.

Bahrain recently banned all protests and demonstration in a dramatic violation of basic rights. But it is only one aspect of the repressive, martial-law type responses from the US-supported dictatorship. Others have included systematic torture, beatings, weaponizing tear gas, imposing curfews, harassing well-known activists, show trials and detentions, and cracking down on press freedoms, among many others.

15 thoughts on “Bahrain Posters: ‘Terrorism is an US Industry’”