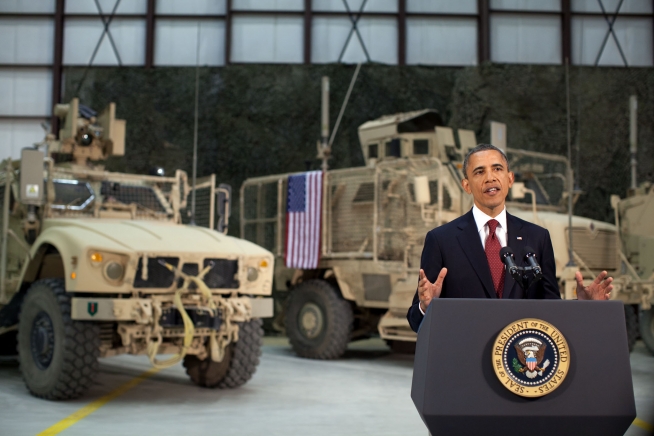 Last week President Obama issued a letter to Congress informing them of ongoing US troop deployments for combat operations around the world.

“Since October 7, 2001, the United States has conducted combat operations in Afghanistan against al-Qa’ida terrorists, their Taliban supporters, and associated forces,” it reads. “In support of these and other overseas operations, the United States has deployed combat-equipped forces to a number of locations in the U.S. Central, Pacific, European, Southern, and Africa Command areas of operation.” In other words, all across the globe.

It goes on to talk about combat deployments in Somalia, Yemen, Egypt, Libya, Uganda, Kosovo, and all over the high seas in maritime operations “aimed at stopping the movement, arming, and financing of certain international terrorist groups.” As a reminder, the President explained “on September 12 a security force deployed to Libya to support the security of U.S. personnel in Libya” and  “on September 13, an additional security force arrived in Yemen in response to security threats there.”

“These forces will remain in place until the security situation no longer requires them,” it said. And here we are led to the crux of the ‘war on terror’:

“It is not possible to know at this time the precise scope or the duration of the deployments of U.S. Armed Forces necessary to counter this terrorist threat to the United States.”

In a straight line, the President here explained how a combat deployment less than a month after the 9/11 attacks is now – more than ten years later – justifying military action in several continents without any “precise scope” limiting their conduct and without any defined end point.

Update: A piece today by Daniel Klaidman at the Daily Beast argues the opposite of what I’ve implied in my above blog post. The article is titled “Will Obama End the War on Terror?”

Yet behind the scenes Obama has led a persistent internal conversation about whether America should remain engaged in a permanent, ever-expanding state of war, one that has pushed the limits of the law, stretched dwindling budgets, and at times strained relations with our allies. “This has always been a concern of the president’s,” says a former military adviser to Obama. “He’s uncomfortable with the idea of war without end.”

…This month Pentagon general counsel Jeh Johnson, with the full backing of the White House, became the first senior member of the administration to openly broach the delicate question of when the war on terror would be over. “Now that the efforts by the U.S. military against al Qaeda are in their 12th year,” he said in a speech at the University of Oxford in England, “we must also ask ourselves, how will this conflict end?”

…Johnson and others in the administration worried about being further out on the margins of the law. And yet the conflict kept widening.

…Many counterterrorism officials are making the case that the administration needs to be more discerning about which groups are worth going after militarily and how to calibrate our response to the level of threat. “Should we resort to drones and Special Operations raids every time some group raises the black banner of al Qaeda?” asks one senior military planner. “How long can we continue to chase offshoots of offshoots around the world?” In at least acknowledging this type of question, Johnson’s speech arguably represented an inflection point for the Obama administration—and perhaps for the war on terror as a whole.

Whether the Obama administration is genuinely concerned about endless war or whether they’ve used Klaidman to portray that concern in order to placate the increasingly non-interventionist sentiment in America remains to be seen. For now, all that’s clear is that such expressed sentiment has not manifested into policy.

29 thoughts on “Obama’s Letter to Congress: War Without End”