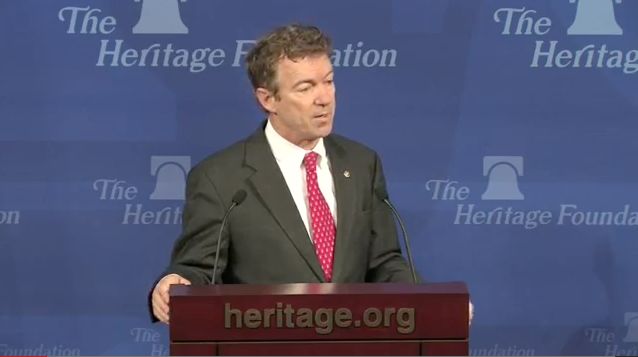 In the news section, I critique some of Senator Rand Paul’s foreign policy speech at the Heritage Foundation yesterday. One aspect of the article that I could not elaborate on is Sen. Paul’s support for sanctions against Iran.

Following his speech yesterday, I was afforded the opportunity to ask Paul a question about about this. The sanctions, I said, are not only strategically ineffective, but they are a cruel form of collective punishment that harm innocent Iranian civilians, without much purpose beyond political points at home. Instead of serving as an alternative to war, as Paul said in his speech, sanctions have historically been a prelude to it.

Here is his response in full:

I believe sanctions are not a prelude to war, but rather a tool to achieve a desired result without war.  While it may be true that others have used sanctions as simply a box to check on the way to war, that does not mean sanctions cannot be used properly. I do not believe they have passed their point of effectiveness, and to say so, to give up on them, may remove one of the last remaining obstacles to a consensus on preemptive war.  I believe sanctions can be enhanced through strategic diplomacy engaging Russia and China. Finally, Iran has recently asked for renewed discussions, some believe this is a direct outcome of the pressure of sanctions.

In addition, I have insisted and been successful in adding language to sanctions assuring that nothing in the legislation is to be interpreted as a decl of war or a use of author of force.

Here, Paul failed to respond to one of the central points in my question, that innocent Iranians are suffering as a result of the sanctions. Unemployment is high, inflation is out of control, the banking industry has all but ground to a halt, and much needed medicine for people with cancer, hemophilia, etc. is being blocked, putting millions of lives at risk, according to the Charity Foundation for Special Diseases, a non-government organization in Iran supporting six million patients.

Paul declined to answer a follow-up question addressing this point.

But of course, the collective punishment aspect is only one part of a larger story. Sanctioned countries almost never change their policies in the direction the sanctioning countries demand. Vali Nasr, Dean of the Johns Hopkins School of Advanced International Studies in D.C. and widely understood as an expert on Iran said just last month that the sanctions have passed the point of effectiveness. Similarly, world-renowned international relations theorist Kenneth Waltz recently wrote in Foreign Affairs that “the current sanctions on Iran can be dropped,” since “they primarily harm ordinary Iranians, with little purpose.”

Nasr said that needlessly keeping sanctions in place will generate “a scenario where Iran is going to rush very quickly towards nuclear power, because they also think, like North Korea, that you have much more leverage to get rid of these sanctions.” In other words, Iran could just dig in its heals if it thinks the sanctions are too draconian and won’t ever let up.

As I’ve written recently, the case of Iraq is instructive. The US-led sanctions on Iraq directly led to the deaths of about 500,000 children, and Washington’s goal was not to make Saddam comply with nuclear standards, but instead to change the regime.

Washington had set out in the early 1990s claiming the purpose of the extreme sanctions on Iraq was to undermine the nuclear weapons program. And “by the first few months of 1997, Iraq had completed the disarmament phase of the cease-fire agreement and the United Nations had developed a monitoring system designed to detect Iraqi violations of the nonproliferation requirement,” report two high level diplomats in Foreign Affairs.

But the US refused to lift the sanctions, and threatened to veto proposals to do so at the UN. “In the spring of 1997, former US Secretary of State Madeleine Albright gave a speech at Georgetown University in which she stated that even if the weapons provisions under the cease-fire resolution were completed, the United States would not agree to lifting sanctions unless Saddam had been removed from power.”

We could be seeing something similar in Iran. And while Rand Paul claims sanctions may get us out of war, in reality they are keeping the Iran issue unresolved and kicking the can down the road – as Clinton did until Bush – for someone else perhaps more willing to do something as reckless as start a war on Iran for a nuclear weapons program it doesn’t have.