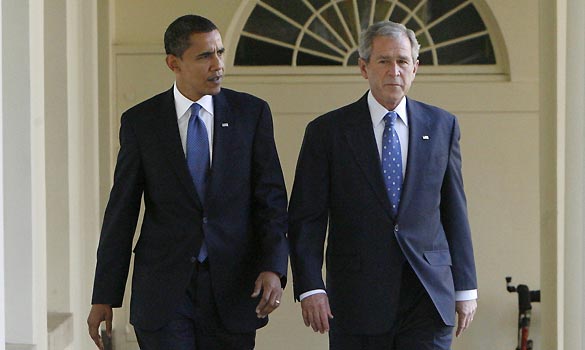 The New York Times makes a comparison between Bush and Obama:

Four years into his tenure, the onetime critic of President George W. Bush finds himself cast as a present-day Mr. Bush, justifying the muscular application of force in the defense of the nation while detractors complain that he has sacrificed the country’s core values in the name of security.

…in broad terms, the conversation generated by the confirmation hearing of John O. Brennan, his nominee for C.I.A. director, underscored the degree to which Mr. Obama has embraced some of Mr. Bush’s approach to counterterrorism, right down to a secret legal memo authorizing presidential action unfettered by outside forces.

By emphasizing drone strikes, Mr. Obama need not bother with the tricky issues of detention and interrogation because terrorists tracked down on his watch are generally incinerated from the sky, not captured and questioned. By dispensing with concerns about due process, he avoids a more traditional war that he fears could lead to American boots on the ground.

So instead of detaining and torturing people, Obama simply kills suspects. And instead of putting boots on the ground, he wages secret, robotic warfare.

Obama’s attempt to destroy the meaning of “imminence” also seems to be a Bush holdover.

See here for a more detailed discussion of how Obama has carried Bush’s torch.