Robert Dreyfuss thinks Obama’s recently revealed policy of supporting Iraqi security forces through the CIA so they can fight al-Qaeda affiliates there and cut off the flow of fighters pouring into Syria is nonsensical. “We’re backing the same guys in Syria that we’re fighting in Iraq,” he says.

How is it that the administration is aiding the Syrian rebel fighters on one hand and fighting them on the other? 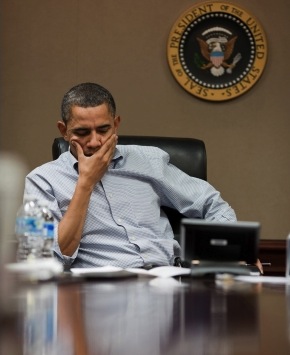 It’s true that Obama has sent non-lethal aid to the rebels, despite the fact that the great bulk of the fighters who actually matter are jihadists. It’s also true that Obama has made it a policy to coordinate the flow of weapons to these groups from Saudi Arabia, Qatar, and Turkey, and that the so-called “vetting process” meant to direct the aid only to moderate elements of the oppositions is, to put it mildly, ineffective (at least according to US intelligence officials).

But the truth is, Obama has ruled out sending decisive aid, lethal or non-lethal, to Syria’s rebels even in the face of claims that up to 70,000 people have been killed in the conflict. Obama reportedly overruled the suggestions of former Secretary of State Hillary Clinton, former Defense Secretary Leon Panetta, and Chairman of the Joint Chiefs Martin Dempsey – all of whom advocated arming the rebels. Instead, Obama made policy moves like designating the al-Qaeda in Iraq offshoot in Syria a terrorist organization and pressuring Saudi Arabia not to send heavier arms like anti-aircraft weapons.

The limited aid the US has sent to the Syrian rebels, while totally unacceptable in my opinion, is primarily a pittance for public consumption so that Obama gets to display his disapproval for the Assad regime’s violence. From the beginning, Obama has articulated a desire to avoid getting involved in another quagmire in Syria and avoid bolstering potentially dangerous rebels with links to al-Qaeda. In this sense, the policy of aiding Iraq’s state militias to crack down on the Islamists coming over the border to fight in Syria – while dangerous – is not so illogical.

The strange thing here is that the CIA’s cooperation with Maliki, a Shiite ally of Assad, to crack down on Sunni Islamists fighting to topple the regime in Syria seems conspicuously like a pro-Assad policy – or at least not an anti-Assad policy.

When I posed this paradox to former CIA intelligence officer and Antiwar.com columnist Phil Giraldi, he concurred.

“I think you are right that Obama has come around to the view that regime change is more fraught with dangers than letting Assad remain,” Giraldi said.

As to the logistics of the CIA’s battle against anti-Assad Islamists in Iraq, “how exactly” this will be accomplished “escapes me,” Giraldi explained.

“Also the border is very long and unpoliceable and located mostly in Sunni country so the whole exercise seems like a plan doomed to fail,” he added.

The Obama administration has had a wobbly position on Syria for a long time, and it should be roundly condemned for continuing to allow (and even encourage) its aforementioned allies to aid the fragmented and extremist Syrian rebel forces. And the newly revealed policy of backing Iraqi militias as they do battle – although it could just be an effort to clear the way for increased aid to Syria’s “moderate” opposition – will almost surely backfire.

But as the State Department spokeswoman Victoria Nuland said back in January, even as the US supports the Syrian opposition in some abstract way, it is of utmost importance to “maintain the functions of the state.” Syria may have been floated as a target for regime change by the Bush administration’s most fanciful neoconservatives, but Obama sees the chaos of Sunni jihadists taking control of Syria as a much worse outcome than Assad sticking around a while longer.