During my junior year of college I was interning at a news show and we were filming a bit on 47th street when a young Pakistani man walked up to me. He said that he and some friends were holding a vigil for those who had died in a recent drone killing, and wanted to know how to get press coverage. I didn’t know the number, but a co-worker did, and gave it to him. I was in a public policy class at the time, and we were talking about drones, back when the debate was very inchoate, most newspapers just took the government estimates for civilian deaths, which we have now learned were, and still are sorely underestimated.

Now, everyone’s talking about drones. Rand Paul is filibustering on the House floor, Eric Holder is drawing fire for his suggestion that Americans may be at risk and the possibility of surveillance is regularly being raised. But I can’t help thinking that the national debate is sorely ethnic centered. I searched through transcripts of Rand Paul’s filibuster for references to Pakistan, and I found some, about a dozen, but out of hours of speaking a dozen isn’t very many, especially since there have been no Americans killed on American soil, and thousands of Pakistanis killed while walking to work – it seems like their plight should be at the center of the debate. Drone strikes aren’t immoral if they kill Americans – they’re immoral.

I used Google Trends and data from The New American Foundation to create the following chart. The number of Pakistanis killed by drones each year is set to a baseline of the highest year (2010) and compared to the number of searches for the word "drones." What can be clearly seen is that while drone deaths in Pakistan reached their height in 2010, and later, in 2011 the year that both Anwar al-Aulaqi and his son were killed in drone strikes interest in the subject barely budged. It wasn’t until early in 2013, when the mere specter of white American being killed on American soil that Americans showed any interest. 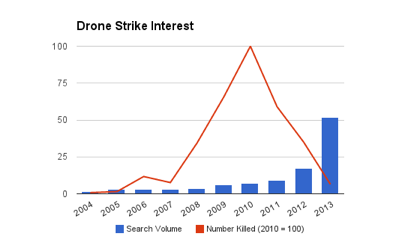 This is a shame, but it’s not an unprecedented one: Americans cared little about the plight of the East Timorese, the Rwandan genocide raised interest only afterward and American troops were pulled from Somalia after nineteen American troops died. Most Americans know how many American soldiers died in the War in Iraq (about 4,500) but few are concerned that some 100,000 Iraqis did.

Americans who are concerned about the President’s (drone strikes started under Bush’s watch) authority to be judge, jury and executioner, should be concerned whether the victim is white or brown, Christian or Muslim, American or Pakistani. That’s why the current debate shouldn’t really excite anyone concerned about American imperial hegemony. After his filibuster, Paul received a short letter from Holder: "Does the President have the authority to use a weaponized drone to kill an American not engaged in combat on American soil? The answer is no." He then withdrew his opposition to Brennan’s nomination. So drones are only a problem if an American can hypothetically be killed on American soil. That’s a shame.

Sean A. McElwee graduated from The King’s College with a degree in Politics, Philosophy and Economics in 2013. He lives in Connecticut and his pieces have been published in The Day and The Norwich Bulletin and on WashingtonMonthly.com and Reason.com. He is a writer for The Moderate Voice.

13 thoughts on “I Should Be Happy About the Drone Debate, But I’m Not”