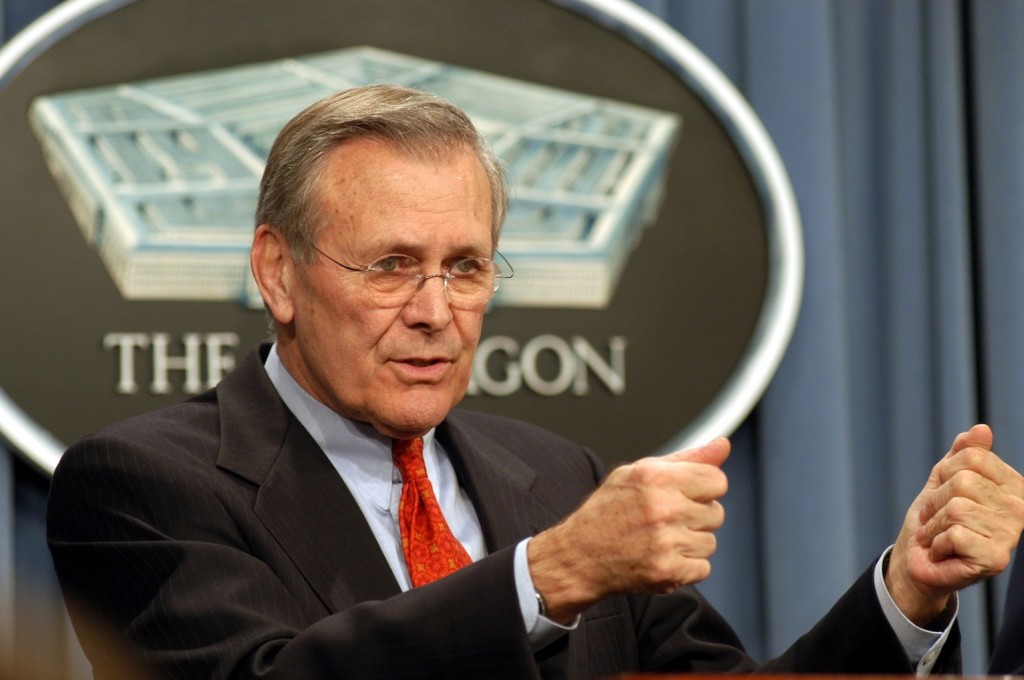 As conditions in Iraq spiraled downward in 2005, Secretary of Defense Donald Rumsfeld prodded the Pentagon press corps to adopt the long view. Instead of focusing on short-term setbacks and daily violence, with all the “gloom and doom” this involved, “we should ask what history will say.” Fighting in Iraq and Afghanistan was admittedly “tough and ugly,” but history would reveal that “America was on freedom’s side,” and that “literally millions of people were enjoying liberty” because of the brave actions of coalition forces.

Famously weak on predictions, Rumsfeld’s suggestion that history will judge the two wars a success and the harbinger of freedom for “literally millions,” seems unlikely. But having just passed the tenth anniversary of the American invasion of Iraq, the secretary’s question is worth pondering: what will history say about this war of choice? And more importantly, what should be remembered?

As we know, history doesn’t write itself and how a society comes to understand its own past is the product of many voices: professional historians to be sure, but also politicians, journalists, filmmakers, schoolteachers and the participants themselves. With regard to the Iraq War the process of remembering has only begun, but the responses this past week provide distressing hints of a possible “verdict,” at least here in the United States.

For a country hooked on anniversaries, this one passed with little fanfare, opening the possibility that the Iraq War might soon be relegated to the margins of national consciousness, along with the Korean War and other military undertakings. There are certainly powerful incentives for those in high places to change the subject and move on.

But if not ignored, the Iraq War is already fitted to a dominant narrative, which emphasizes the “mistaken” nature of the enterprise, undertaken out of an excess of fear and zeal in the aftermath of 9/11. In that account, the Bush sdministration’s careless and possibly dishonest evaluation of intelligence about “weapons of mass destruction” features prominently, as does the gullibility of the mass media and major public figures. Also highlighted are the thousands of dead Americans and Iraqis, the trillions of dollars already spent or committed and the damage to the U.S. economy of paying for the war with borrowed money. Criticisms abound, but it is worth pondering some missing pieces.

Less emphasized or omitted entirely is the suffering of the Iraqi people — not just the body count, but also the myriad ways in which ordinary life in that country was upended, once the Americans and British had arrived. Beyond the numbing death toll, the experience of live Iraqis might stir an empathic response and deepen Americans’ understanding of what military intervention in foreign lands has entailed. Yet pour through the stories of the tenth anniversary and see how scarce is that discussion.

Consider the obfuscation that surrounds Fallujah — for American soldiers, the most bloody battle of the war. In December 2011, President Obama referred to it in a speech at Fort Bragg, marking the final withdrawal of U.S. troops from Iraq:

The war in Iraq will soon belong to history. Your service belongs to the ages. Never forget that you are part of an unbroken line of heroes spanning two centuries… men and women who fought for the same principles in Fallujah and Kandahar, and delivered justice to those who attacked us on 9/11.

Pumped up rhetoric for an awkward occasion, but also misleading. It is possible that not a single person responsible for the terrorist attack on the United States was present in Fallujah. However, in driving insurgents out of the city, American bombers and artillery flattened thousands of homes and other buildings, rendering large areas uninhabitable for many months. Since then, Fallujah’s hospitals have reported a dramatic rise in child mortality, cancer, leukemia and other birth defects, which have exceeded the rates found among survivors in Hiroshima and Nagasaki.

Widely reported in the British press and elsewhere, some of these children have exhibited grotesque malformations — missing arms and legs, cleft palates, elongated heads, malformed ears, noses and spines. Mothers have been warned not to become pregnant. Among the inhabitants of Fallujah, it has been widely assumed that the American use of depleted uranium and white phosphorus during the battle is the cause. Perhaps these complaints are exaggerated?  It is obviously more congenial to praise the “unbroken line of heroes” then to launch a serious inquiry into what role these weapons may have played in the continuing trauma of this Iraqi city.

This omission is linked to the crashing silence, which surrounds “war crimes.” As happened during the Vietnam War, a handful of dramatic cases, where there were photographs, received substantial attention — the torture of prisoners at Abu Ghraib, the massacre of women and children in Haditha come to mind. But the larger issue is the extent to which crimes against civilians were pervasive: American soldiers breaking down doors and terrorizing whole families, shooting unarmed people at check-points, roughing up young men in civilian clothes because they looked suspicious, or killing someone, who was carrying a shopping bag that turned out to be groceries.

More publicity has surrounded the growing number of veteran suicides and cases of PTSD. But there is a reluctance to ask how much of this personal anguish is directly related to observation or participation in wartime acts, which have profoundly shamed normally ethical men and women in uniform? In 2008, scores of Iraq War veterans participated in fours days of “Winter Soldier” hearings, where at great emotional cost and some personal risk, they testified to harrowing stories of crimes committed during their deployment. Although the event was held in Silver Springs, Maryland just outside Washington, mainstream media stayed away. When pressed for an explanation, the public editor for the New York Times claimed nonsensically that his newspaper preferred “their own on-the-scenes” accounts of the war,” as if their reporters didn’t routinely cover and rely on secondhand sources, including Pentagon briefings.

When it comes to American “war crimes,” there is a willed not knowing that effectively exonerates those elected officials in the White House and in Congress, along with military leaders, who bear the responsibility of sending American soldiers into Iraq under false pretenses and keeping them there. It obscures the need to investigate why these soldiers were deployed without adequate equipment or a coherent plan, sometimes three and four times, into a country that did not welcome them, on a mission that had nothing to do with delivering “justice to those who attacked us on 9/11.”

This whitewash extends to the entire chain of decisions, not only to launch but also to perpetuate for eight additional years an entirely unnecessary war. On the occasion of the tenth anniversary, the designated villains remain Bush, Cheney and Rumsfeld, who are widely condemned for propelling the United States into a war on the basis of flawed evidence. The enabling role of others has been variously characterized, with an underlying assumption of excessive credulity rather then purposeful evasion.

But while Bush, Cheney and Rumsfeld make an appealing group of villains, embodying as they do the Deadly Sins of Sloth, Wrath and Pride, responsibility for the Iraq War is not limited to them, nor for that matter to the single decision to begin a war, as opposed to successive decisions to continue it. Neatly obscured by this formulation is the extent to which a host of important people and institutions advocated these policies in the face of contrary information in their possession. The stellar example is Secretary of State Colin Powell, who while fully aware of the poor quality of the intelligence went before the United Nations claiming, “What we’re giving you are facts and conclusions based on solid evidence.” It is telling that despite revelations of this deceptiveness, he has somehow remained a national hero, whose views on national security are earnestly sought.

There were as well the 77 senators and 296 representatives, who voted to authorize President Bush to use force in Iraq and then voted year after year to keep funding the war. It would be interesting to know how many of them carefully perused the evidence provided by the White House or genuinely believed that Saddam Hussein posed an imminent or even long-range threat to the United States. Certainly not Senator Hillary Clinton, who as the wife of a former president, would have known that the danger was being purposefully hyped. But even for her colleagues, the reasons for skepticism were manifold. Any moderately intelligent, concerned member of Congress would have noticed that when UN Weapons Inspector Hans Blix and his team visited the alleged WMD sites designated by the Bush Administration (“we know where the weapons are”) and found nothing, it was a sign they might not exist.

A similar point applies to the mainstream news media. Its complaints about the administration’s deception have always been legion, but the more consequential point is how their own “deciders,” purposefully marginalized the experts, who knew better: Mohammed El Baradei, who headed up the International Atomic Energy Agency, Scott Ritter, who had led the UN weapons inspection team during the 1990’s, the legions of Middle East specialists across the country, who warned about the grave consequences that would result from an invasion and occupation of Iraq. Ten years later, there is still no recognition that the virtual exclusion of dissident voices denied the American people vitally important information upon which to frame an opinion. Nor for that matter has the media altered the habit of using as their “experts,” the purveyors of conventional wisdom.

There is no denying the aura of negativity that hovers over the Iraq War and robs this tenth anniversary of any glory or good cheer. However the failure to take account of these discordant elements — the ruin of “literally millions” of Iraqi lives, the pervasiveness of war crimes that continue to afflict the people of both nations, the institutional preference for militaristic solutions that stifled honest debate — is also a barrier to a much needed historical inquiry. For there are searing questions yet to be answered: how did a crime against three thousand Americans transform so readily into a war against a country that had no connection to it? And why has it happened that the tragedy of September 11 has morphed into an ever-expanding pattern of violence and revenge?

“What will history say,” asked Donald Rumsfeld? Well that depends on many things, including the way those of us, who are professional historians do our job.

Carolyn Eisenberg teaches the history of U.S. foreign policy at Hofstra University and is the author of a forthcoming book on the national security policy of Richard Nixon and Henry Kissinger.

21 thoughts on “Donald Rumsfeld: ‘What Will History Say?’”