A recent news report asking “Where is Dubya?” found the former president totally unengaged, spending his time painting strange portraits of himself in the bath. In what seems to be a weird personal attempt to emulate Winston Churchill (but more reminiscent of Marie Antoinette playing shepherdess in her last days), the former president calmly ignores the sickening truth that slowly but surely emerges about his Administration’s crimes as well as recent UN demands that U.S. leaders be charged with war crimes (i.e. Ben Emmerson, the lead special investigator, recently described to gathered UN dignitaries a setting of self-approved legal immunity among U.S. and UK national leaders. He called the two governments’ standing policy, “A policy of de facto immunity for public officials who engaged in acts of torture, rendition and secret detention, and their superiors and political masters who authorized these acts.”)

So the hard task will clearly fall to George W. Bush’s soon-to-open Presidential Center to re-fashion history and create the legacy of the great “Decider” who, with neo-con help, so longed to be a “war president” that he decided to illegally and recklessly launch a “war of choice” (otherwise known as the illegal and catastrophic war of aggression upon Iraq based on false premises). The new Bush Library will undoubtedly also credit their namesake with the idea of initiating the “global war on a tactic (GWOT)” that, despite a recent bipartisan congressional bill to end it, teeters on the verge of being made permanent. Bush’s successor having cleverly re-named it, then stretched and expanded GWOT to so many new countries that it now has come full circle under rhetoric of “keeping us safe” from foreign enemies that it now targets U.S. citizens for indefinite detention and assassination and includes the U.S. as part of its ever-widening global battlefield.

Whoever said we can’t look back must not have reckoned with the fact and force of such a Presidential Lie-Bury! Luckily some Dallas residents have sprung to the task of putting forward an honest “People’s Response” to the deceptive refashioning of this unethical and illegal history. Here’s an excerpt from their press release:

When the George W. Bush Library and Policy Institute is dedicated on April 25, 2013, at Southern Methodist University (SMU) in Dallas, Texas, protestors will be there to demand the ex-president be held accountable for war crimes, crimes against humanity, and violations of U.S. and international law. President Barack Obama, former U.S. presidents and many heads of state are expected to attend the dedication ceremony.

A coalition of local, state and national peace and justice groups organizing the protest is inviting people from across the country to participate in an event called “The People’s Response.” According to Leslie Harris of CODEPINK Greater Dallas, “The illegal invasion of a sovereign nation was declared a ‘supreme crime’ at the Nuremberg trials. That Bush and his advisors walk free today is unconscionable; there must be accountability so history won’t repeat itself.”

Reverend Bill McElvaney, professor emeritus, Perkins School of Theology at SMU, an early opponent of locating the George W. Bush Institute on campus, said, “The invasion of Iraq, and the approval of torture are violations of the United Methodist Social Principles, thus placing Southern Methodist University in contradiction to its own heritage as an institution of The United Methodist Church.”

I plan to participate for a lot of reasons but most fundamentally, from having spent 24 years as an FBI agent working in the criminal justice system always and inherently focused on looking backward to solve the worst crimes, I understand the true purpose of Obama’s ridiculous “only look forward” cover-up was to continue, make worse and even expand upon Bush’s illegal wars, war crimes and war profiteering. It’s hard to put this into words better than author and researcher, “War Is A Crime” and “Let’s Try Democracy” activist David Swanson as he explains “Why I’m Attending the Dedication of the Bush Lie Bury.” 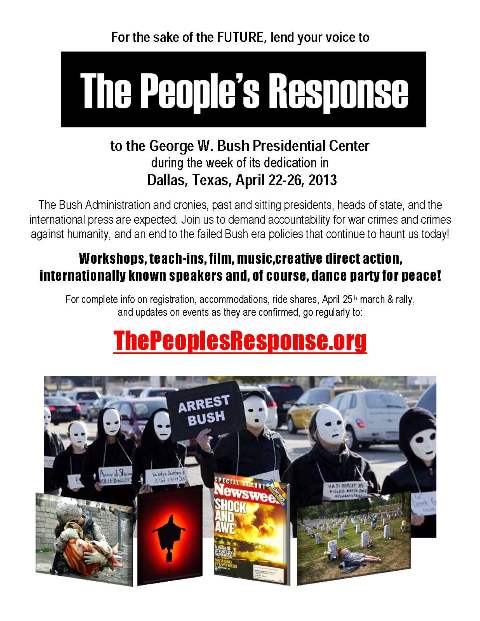