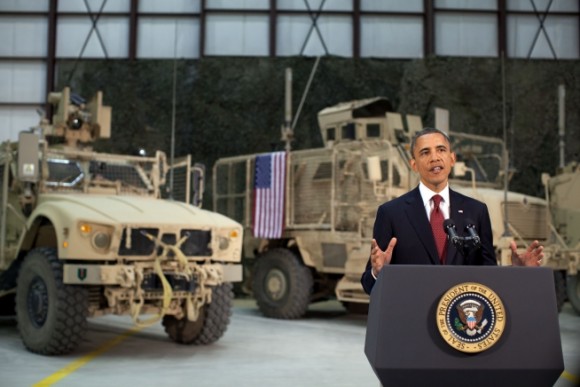 Victor Davis Hanson’s latest piece at The National Review can only be described as delusional.

Hanson makes the argument that Obama’s foreign policy is “neo-isolationist” – whatever that means. Most Republicans are still unable to restrain from hurling the “isolationist” epithet toward anyone who questions America’s constant militarism in every corner of planet, but Hanson has gone ahead and popped a pretentious “neo” at the front there, without much indication of what that’s supposed to mean.

Consider how convoluted the argument has to be in order to justify the neo-isolationist label. Hanson says Obama “led from behind” in Libya – where the Obama administration picked sides in a civil war, serving as an air force for unaccountable Islamist rebel militias – “only to leave the mess that followed to warring Islamist tribes.” Ah, so intervening militarily to unseat a government we had previously been sending foreign aid to qualifies as “neo-isolationism” because Obama refused to forcibly set up an pro-American government, train a new military force, and squash any domestic opposition?

Hanson then criticizes Obama’s policy towards Egypt because the new regime is “lectur[ing] us that any reduction in our ample foreign aid will result in a far worse alternative.” Ah, so providing $2 billion in foreign aid plus more in military aid every single year to Cairo in order to maintain American military, economic, and political preeminence in the Middle East and “keep the Americans in, the Chinese and Russians out, the Iranians down, and the Israelis safe” qualifies as “neo-isolationism”? What part of the word “isolationism” is at all relevant here?

Obama’s policy toward Egypt has not changed fundamentally from what US policy has been since WWII, so Hanson must be claiming that America has always had a “neo-isolationist” approach. Right-wing hawks are so helplessly upset that America’s favorite Arab tyrant, Mubarak, is gone that they just flail around baseless criticisms of Egypt until their heads cool.

Although “Obama, in one term, may have expanded targeted assassinations by drones tenfold over the tally of the eight-year Bush presidency,” Hanson writes, it’s still a “neo-isolationist” policy because Obama drops bombs in a secret, unaccountable war as a “substitute for the deployment of US ground troops.”

And in Afghanistan, where the US remains involved in a war doomed to fail thanks to a Bush-like military surge Obama implemented in 2009 – yeah that’s “neo-isolationist” too.

And of course since Obama hasn’t invaded and occupied Syria that makes him a “neo-isolationist.” Never mind the fact that the US has funded and trained a select group of Syrian rebels while helping Saudi Arabia, Qatar, and Turkey send lethal aid to the rest, despite ties to al-Qaeda groups. Obama has also put troops into Jordan and ordered the CIA back into Iraq to aid Baghdad’s security forces in stemming the flow of AQI fighters into Syria.

And because Obama “fail[ed] to support the hundreds of thousands of Iranian protesters in the spring of 2009,” in what neo-conservatives absurdly believe would have magically turned into a popular overthrow of the regime in Tehran, he’s a “neo-isolationist.” Again, disregard the fact that Obama has heaped the most comprehensive set of sanctions on the Iranian economy since the genocidal ones in Iraq killed a million people. Forget that the Obama administration launched the first ever large-scale cyber-attack on Iran with the Stuxnet virus. Brush aside our support for Israel, even as Tel Aviv orchestrated terrorist attacks on Iranian scientists with the help of militants who were on the State Department’s list of terrorist organizations until last year. Forget the US surveillance drones hovering over Iran, too. All this as US intelligence continues to maintain that Tehran is not developing nuclear weapons.

Then there are all the interventionist policies Obama has been pursuing that aren’t mentioned in Hanson’s piece, like the aggressive military surge in Asia-Pacific aimed at containing China’s rise despite it not posing any threat to Americans. Or how about Obama’s Reagan-like policies in Honduras, where Washington is supporting a brutal regime that came to power in a military coup and infiltrating the country with commando-style drug enforcement agents who train Honduran death squads to kill suspects in the failed drug war.

As Robert Golan-Vilella writes at The National Interest, “That label doesn’t apply even if one grants Hanson all of his other criticisms of Obama—on Syria, Iran, defense spending and so on. It only begins to make sense if your default assumption is that the United States can and should be intervening everywhere, all the time.”

38 thoughts on “The National Review is Serious: Obama is a ‘Neo-Isolationist’”