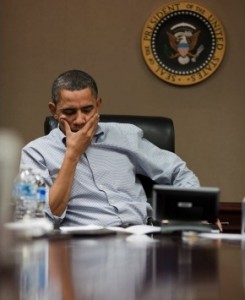 In response to a question about the hunger strike currently sweeping the prison, President Obama today once again promised to close the U.S. detention facility at Guantanamo Bay, Cuba. Obama spoke eloquently about the issue, saying “It is inefficient, it hurts us in terms of our international standing, it lessens co-operation with our allies on counter-terrorism efforts, it is a recruitment tool for extremists, it needs to be closed.” He also said “Guantanamo is not necessary to keep America safe.”

Commendable, heartening words! Similar to ones said back in October when the president assured comedian Jon Stewart that the prison had to close.  Similar, too, to Obama’s speechifying while on the campaign trail in 2008.

Indeed, today’s press conference president sounded a bit like old Obama; that mythical creature who existed circa 2007-2009, and who was going to bring about transparency in government, stop the wars, be “cool” about drugs, and…close Gitmo.

And it sounds good every time he says it…Obama said today that his administration was going to “examine every option that we have administratively to try to deal with this issue. But ultimately, we’re also going to need some help from Congress.” Congress isn’t blameless, but there’s been more than 1500 days of Gitmo under Obama’s watch. If presidents are going to claim the staggering number of powers they currently possess — say, the power to put anyone, American citizen or not, on a kill list — it’s fair for them to bear the brunt of criticisms when inhumane institutions like Gitmo remain open, no?

Congress should be shamed for their inability to accept that Gitmo cannot continue forever. But there are very real things that Obama either should have done, can do, or can stop in order to begin the process of shutting down the prison.

Eighty-six men at Gitmo are cleared for release. If Obama was that interested in bringing back America’s standing in the world, he wouldn’t have signed the National Defense Authorization Act in 2011 and ’12. But that ship — along with indefinite detainment — has sailed. So what now? Currently around 90 of the 159 Gitmo prisoners are  from Yemen. If Obama was sincere today, he might try removing the three-year-old suspension of transfers to that nation.

Obama might truly be uncomfortable with Gitmo’s existence, which would be a good sign that he’s not a sociopath. But there are people suffering and dying there now. People who have been held without charge for more than a decade. Obama is right that that sort of “justice” doesn’t fit with the ideals of America. And settling this mess is going to be a pain in the ass. But just because you’ve said a lot of serious words about the seriousness of the issue doesn’t get you off the hook when you do nothing.

A truly moral person — an absurd concept for a leader — wouldn’t let his own party, or a contentious Congress stand in his way. Even if that meant political ruin. Obama hasn’t done that. And besides, indefinite detainment isn’t going anywhere anyway. As Mother Jones noted back in November:

Experts from both sides of the aisle do agree that when Obama talks about closing Guantanamo, he’s not talking about ending the practice of indefinitely detaining terrorist suspects without trial. Instead, he’s talking about what to do with the prisoners already in US custody, whose future is uncertain.

Obama should (but probably won’t) act before this hunger strike proves fatal for scores of men. But even if Gitmo goes, Obama will continue doing what he does best — playing a shell game with the powers Bush, and 42 other presidents, claimed before him, and acting like they’re gone, when they’ve simply been moved around. And since it’s legislative, judicial, and executive powers combining to let this human rights debacle continue, Gitmo will probably end up just a small speck of dust on Obama’s legacy. Spread the blame around enough, and nothing gets done, and it’s nobody’s fault.