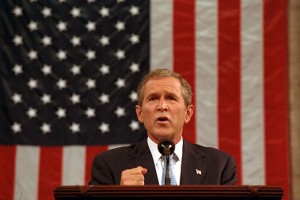 The September 18, 2001 Authorization for Use of Military Force (AUMF), ostensibly a vehicle for the U.S. to go after the perpetrators of the 9/11 terrorist attacks in New York and Washington, DC., turns out to have been a whole hell of a lot more than that nearly 12 years on. That simple joint resolution has been stretched very thin during the War on Terror. The original text gives the President permission to “use all necessary and appropriate force against those nations, organizations, or persons he determines planned, authorized, committed, or aided the terrorist attacks that occurred on September 11, 2001, or harbored such organizations or persons.” Fair enough (ish).

But since September, 2001, we’ve had 12 years of war in Afghanistan. The Bush administration also used the AUMF to justify Gitmo and still-unknown levels of NSA spying on Americans. Bush began the drone program cautiously (relatively speaking), and the Obama administration’s drone strikes have continued and dramatically increased the scope and scale of those attacks — branching out into strike in Yemen, Somalia, Mali, and elsewhere. In short, the AUMF has served as a sturdy pillar of support for the potentially endless and apparently geographically limitless War on Terror.

So, knowing that, it’s almost tempting to take talk of an “update” to the resolution as good news. Could it be any worse?

Sure could. Most of the folks wanting to fix AUMF are notoriously hawkish. Sens. John McCain and Lindsey Graham being the most obvious — and alarming — examples of powerful folks who believe the president’s war powers are being forever constrained. Graham seems to miss no opportunity to clamor for more powers for the president. After the Boston Marathon bombing,he repeatedly demanded that surviving suspect Dzhokhar Tsarnaev be treated as an enemy combatant. Sen. Bob Corker is also touting the “update” AUMF line heavily. And has McCain met a warmaking power he doesn’t like, at least in the past 13 years?

A new resolution could call for military action only against al Qaeda or affiliate groups, or organizations designated by Congress as terror backers, according to sources close to the talks. Obama would still be authorized to hold terror detainees, but there would be more congressional oversight of the U.S. struggle against such terror threats, a particularly sensitive issue in light of the recent Boston Marathon bombing.

The problem with messing with the AUMF has been pointed out by various sources in the last few months, including Antiwar’s Kelley B. Vlahos who wrote “Beware of Lawyers Bearing AUMF Fix” in April. Vlahos noted that various Senators, unnamed Obama sources, and the Brookings Institution are all repeating the line that the AUMF is “obsolete” and needs to be updated in order to explicitly authorize new foreign adventures against groups with –at best — tertiary ties to Al-Qaeda.  (Similar agenda, or just terrorists in general, the point is why have broad powers of war stifled by the need for a tie to 9/11?)

In March, Slate reminded us that Congress may be asking for new definitions of Obama’s war-fighting power in order to control it, but they have a laughable track record in that particular area. (See: a large chunk of the 20th century, the start of this one.)

The killing takeaway from the Politico article was also spotted by Empty Wheel, who noted the disturbing overlap between those who crafted the indefinite detainment portion of the 2012 NDAA,and those who think the AUMF isn’t strong enough.

Some Democrats, for their part, worry that vocal Obama critics like [Sen. Rand] Paul and Ted Cruz (R-Texas) — or dozens of House Republicans — would use such a debate to attack the president’s policy on all military and national security issues, not just terror-related topics.

“Can you imagine what Paul or Cruz would do with this?” said one top Democratic aide. “It could be a disaster. And it would be worse in the House.” [emphasis added]

There you have it. Nobody hankering to rewrite the rules of war should be trusted in this task, especially not these guys. The only thing to do with the AUMF is repeal it.