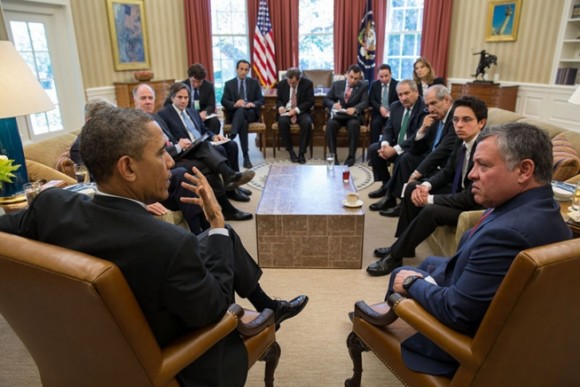 Much has been made of the Obama administration’s decision to set up shop in Jordan under the pretense of containing the Syrian conflict and of training so-called moderate elements in the Syrian rebel opposition. That is the pretense that has so far been publicized in the news media and is thus the pretense that critics have denounced as a matter of policy.

The popular refrain among those who oppose US intervention in Syria has been that the Obama administration is siding with Sunni jihadists to unseat the Assad regime. I’ve argued that is not what is happening, or at least that it is grossly oversimplified.

Another piece of the puzzle has been made public with a report from journalist Phil Sands who interviewed one of the Syrian rebel commanders that met with US officials in Jordan. According to him, “the Americans were more interested in talking about Jabhat Al Nusra, the Al Qaeda-affiliated group waging war on the Syrian regime, than they were in helping the rebels advance on Damascus.”

The Americans began discussing the possibility of drone strikes on Al Nusra camps inside Syria and tried to enlist the rebels to fight their fellow insurgents.

“The US intelligence officer said, ‘We can train 30 of your fighters a month, and we want you to fight Al Nusra’,” the rebel commander recalled.

Opposition forces should be uniting against Mr Al Assad’s more powerful and better-equipped army, not waging war among themselves, the rebel commander replied. The response from a senior US intelligence officer was blunt.

“I’m not going to lie to you. We’d prefer you fight Al Nusra now, and then fight Assad’s army. You should kill these Nusra people. We’ll do it if you don’t,” the rebel leader quoted the officer as saying.

What the commander says transpired in Jordan illustrates a dilemma that has preoccupied, even paralysed, Syria’s opposition and their international supporters – how to deal with the expanding role of Islamic extremists in the anti-Assad insurgency.

Other meetings with Western and Arab intelligence services have shown a similar obsession with Al Nusra, the commander said.

“All anyone wants is hard information about Al Nusra, it seems to be all they are really interested in. It’s the most valuable commodity you can have when dealing with these intelligence agencies,” he said.

According to this rebel commander, his goal of overthrowing the Assad regime was sidelined in favor of American plans to have the rebels fight among themselves. This falls in line with several other publicly available accounts of the US approach.

In describing Jordan’s role serving as a conduit for arms going to a select group of Syrian rebels, the Guardian reported last month that the US and its allies “have sharply increased their backing of some rebels to try to stop the advances of al-Qaeda-linked groups among them.”

“A push to defeat al-Qaeda, rather than an outright bid to oust Syria’s leader, Bashar al-Assad, is Jordan’s driving force,” the Guardian added.

In addition to the clandestine effort in Jordan to fight the Nusra Front, the Obama administration has also sent the CIA back into Iraq to support Iraqi state militias (the Shiite regime in Baghdad is an ally of Assad, nominally at least) to fight al-Qaeda affiliates pouring into Syria to join the rebellion. The Obama administration even considered a request from the Iraqi government to use drones to bomb Islamist rebel forces along the Iraq-Syria border.

It’s true that Obama has sent non-lethal and (indirectly) lethal aid to the rebels, despite the fact that the great bulk of the fighters who actually matter are jihadists. But the truth is, Obama has ruled out sending decisive aid, lethal or non-lethal, to Syria’s rebels. He reportedly overruled the suggestions of former Secretary of State Hillary Clinton, former Defense Secretary Leon Panetta, and Chairman of the Joint Chiefs Martin Dempsey – all of whom advocated arming the rebels. Instead, Obama made policy moves like designating the al-Qaeda in Iraq offshoot in Syria a terrorist organization and pressuring Saudi Arabia not to send heavier arms like anti-aircraft weapons.

As the State Department spokeswoman Victoria Nuland said back in January, even as the US supports the Syrian opposition in some abstract way, it is of utmost importance to “maintain the functions of the state.” Syria may have been floated as a target for regime change by the Bush administration’s most fanciful neoconservatives, but Obama sees the chaos of Sunni jihadists taking control of Syria as a much worse outcome than Assad sticking around a while longer.

That said, this policy shift comes far too late. The Syrian war is now early in its third year and weapons from Washington’s Wahabi zealots in Saudi Arabia and in places like Qatar have undoubtedly made their way into the hands of jihadists. The protracted conflict, as Peter Harling and Sarah Birke write at The Middle East Research and Information Project, “never would have reached such cataclysmic proportions were it not for more than a little help from abroad.”

“The opposition would have thought twice about taking up arms had it not been convinced by shallow shows of Western outrage that it would not be left to face the consequences alone,” they argue.

US foreign policy is constantly remedying the catastrophes it has previously wrought. Bush’s war for regime change in Iraq gave rise to al-Qaeda in Iraq (AQI). Obama’s meddling (and that of his allies in the Gulf) in Syria’s civil conflict prompted AQI to move to Syria and fight Assad as Jabhat al-Nusra. Now the meddling continues to try and eliminate al-Nusra, which has quickly become the foremost element in Syria’s rebellion. It is an endless trail of failures, leading to more interventions, which lead to more failures.