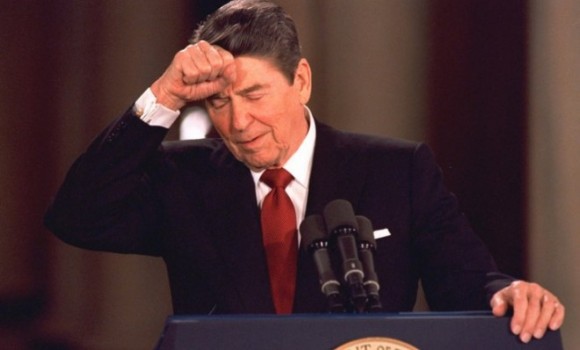 With the manufactured Benghazi scandal tying with the IRS for the story that the right is pretending is a story, it’s worth looking back at what a real scandal looks like. Most people think of Watergate when they think “scandal” but by Nixon standards, Watergate is just a little icing on the cake.

The premise behind the Benghazi scandal is that the President failed to label the attack an “act of terror,” and misled Americans about the attack; both for political reasons. Some Conservatives are even calling for impeachment. Aside from the dubious nature of the allegations, it may be worth asking the right to examine the plank lodged in its eye before inventing a speck in the President’s.

Consider, for instance, Nixon sabotaging the Paris Peace Accords for blatantly political reasons. Christopher Hitchens wrote in his compact but explosive expose on Kissinger, The Trials of Henry Kissinger,

In the fall of 1968, Richard Nixon and some of his emissaries and underlings set out to sabotage the Paris peace negotiations on Vietnam. The means they chose were simple: they privately assured the South Vietnamese military rulers that an incoming Republican regime would offer them a better deal than would a Democratic one. In this way, they undercut both the talks themselves and the electoral strategy of Vice President Hubert Humphrey. The tactic “worked,” in that the South Vietnamese junta withdrew from the talks on the eve of the election, thereby destroying the peace initiative on which the Democrats had based their campaign.

The recently released Johnson tapes confirm that not only is Nixon partially responsible for the tens of thousands of Americans and Vietnamese who needlessly died after the talks fell apart, but Johnson was aware of the “treason.”

And what about the Iran-Contra affair? Even today, many Americans may be surprised at just what the Reagan administration did: high level officials secretly sold weapons to Iran through Israel (to get hostages freed for political purposes) and then used the money to illegally fund the Contras in Nicaragua. After tens of thousands of innocent civilians were maimed by the guerrilla forces that were fighting against the elected government of Nicaragua, the Nicaraguans took the U.S. to the World Court and won. The court found the U.S. guilty of “hereof which involve the use of force, has acted, against the Republic of Nicaragua, in breach of its obligation under customary international law not to use force against another State.” Reagan ignored the decision and the U.S. used its position on the Security Council to block any enforcement of the judgement.

But, what about the IRS targeting Tea Party groups? Well, a little paperwork certainly is annoying, but it’s hardly the worst thing the U.S. government has done to political enemies. Consider COINTELPRO, the FBI’s program to disrupt domestic political organizations. The program included reporting members of the Socialist Workers Party to their bosses, a “war” against to discredit Rev. King Jr. and after spending years subverting the Black Panthers, evenually assassinating a Black Panther leader, Fred Hampton. Read that twice.

We could discuss Ford giving Suharto a go ahead to invade East Timor, Operation MONGOOSE, the recent discovery that the U.S. killed enemies of the Pakistani government for access to airspace, but the larger point remains: the Benghazi “scandal” is a product of the right-wing echo chamber, not legitimate outrage over truly nefarious actions. Those who follow hyperlinks will note with despair that most of my sources come from foreign media, where most of the reporting on real scandals occurs. The American media (with the exception of outlets like Antiwar.com free of commercial censorship) will largely report on minor scandals, leaving the good stuff to be buried decades in the future. Even today, most Americans know of Watergate, but few know of COINTELPRO and the Paris Accords.

Sean McElwee has previously written for The Day and The Norwich Bulletin and on WashingtonMonthly.com and Reason.com. He is a writer for The Moderate Voice. Visit his blog at http://www.seanamcelwee.com.

18 thoughts on “How Scandalous Are These Scandals, Anyway?”