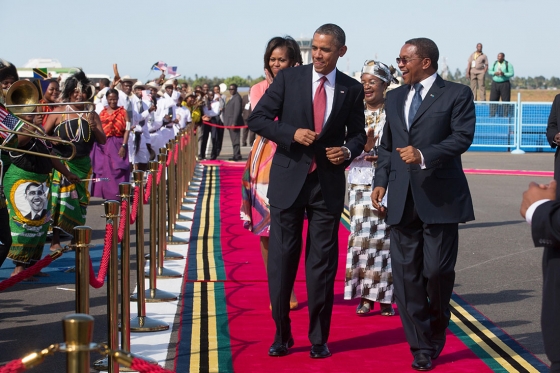 Obama’s trip to Africa is a propaganda crusade. As the president talks about growing economies and making electricity more available to the continent, he is all hush hush on what is actually happening in Africa with regard to U.S. policy. Namely, Obama has increased U.S. military presence and interventionism in Africa to unprecedented levels and is meanwhile trying to win a geo-political game with China to exploit the economic potential of the continent under the control of Washington.

Striking Islamist militants with drones, supporting African forces in stabilizing Somalia and Mali and deploying dozens of training teams, the U.S. military has returned to Africa…

Nevertheless, with some 4,000-5,000 personnel on the ground at any given time, the United States now has more troops in Africa than at any point since its Somalia intervention two decades ago…

There are two main reasons behind the build up: to counter al Qaeda and other militant groups, and to win influence in a continent that could become an increasingly important destination for American trade and investment as China’s presence grows in Africa.

These strategies, according to the Reuters report, are “key to the strategy of winning influence in a continent where China has surpassed the United States as the No.1 trade partner and has huge mining, energy and infrastructure investments.”

Indeed, “China-Africa trade grew 1000% from $10 billion in 2000 to $107 billion in 2008,” according to Zbigniew Brzezinski’s recent book Strategic Vision (p. 81). Washington, as it is wont to do, views greater economic engagement and independence as a threat to its control over the world. That’s why Obama has turned a growing Chinese economy into a reason to “pivot” to Asia and essentially surround China militarily.

Greater economic interdependence between Americans and Africans is a good thing and would enrich both peoples. But not in the way Obama wants to do it. Consider the Middle East, long the dominion of the Washington elite, and how it has been rife with major U.S. rent-seeking corporations and the world’s biggest employer (that is, the Defense Department). After WWII and throughout the Cold War, the U.S. “competed for influence” in the Middle East with Soviet Russia just as it’s now doing with China in Africa. We needn’t go through that ugly history.

Also consider the dishonesty of the other stated justification for expanding the empire into Africa: to counter the al-Qaeda presence. This is like the Bush administration justifying military occupation of Iraq to fight al-Qaeda when al-Qaeda only ever came to Iraq to counter the U.S. occupation.

Al-Qaeda’s real but very exaggerated presence in Africa was generated in large part by the U.S.-NATO war in Libya two years ago. Jihadist fighters from abroad joined the rebel militias in Libya early on and then exploited the power vacuum left when the U.S. helped them overthrow the Gadhafi regime. Ansar al-Sharia now has a presence in Libya and Islamic extremists are present in Mali, which was destabilized thanks to the chaos in Libya. In Nigeria, the radical group Boko Haram has not had its sights on the U.S., but that is likely to change in due time thanks to increased U.S. support for the Nigerian military.

Patrick Meehan, chairman of the U.S. Congressional committee that drew up a big, scary report on Boko Haram a few years ago, said “While I recognize there is little evidence at this moment to suggest Boko Haram is planning attacks against the [U.S.] homeland, lack of evidence does not mean it cannot happen.”

Then there is al-Shabab, another group whose capabilities Washington is exaggerating in order to use it as a pretext for interventionism.

“The group poses no direct threat to the security of the United States,” writes Malou Innocent, Foreign Policy Analyst at the Cato Institute. “However, exaggerated claims about the specter of al Qaeda could produce policy decisions that exacerbate a localized, regional problem into a global one.”

Even the Obama administration has quietly acknowledged the fact that military involvement in Somalia may create more problems than it solves, with one administration official telling the Washington Post last year there is a “concern that a broader campaign could turn al-Shabab from a regional menace into an adversary determined to carry out attacks on U.S. soil.”

Here’s a better route: decrease the militaristic meddling and interventionism in Africa and allow economies in the continent to develop and globalize without control from the U.S. government.

36 thoughts on “Obama Moves to Militarize and Exploit Africa”