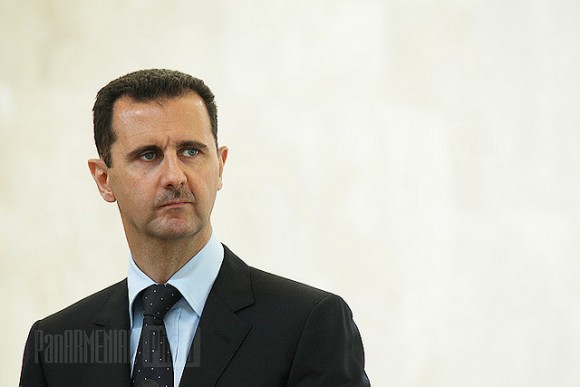 Aaron David Miller thinks the Obama administration will bomb Syria, aiming not to topple the Assad regime but to “make a point.”

Noting the Obama administration’s reluctance to go to war in Syria, Miller expects a “middle-ground response” like “targeted attacks against Syrian military units associated with chemical-weapons capacity and infrastructure,” which would “split the difference between doing nothing on the one hand and using the chemical-weapons issue to change the battlefield balance against the regime on the other.”

Obama has long viewed toppling Assad as problematic. The State Department said early this year that it is of utmost importance to “maintain the functions of the state” in Syria, so as to avoid a power vacuum that the al-Qaeda-linked jihadists could take advantage of. As Phil Giraldi, former CIA intelligence officer and Antiwar.com columnist, told me back in March, “Obama has come around to the view that regime change is more fraught with dangers than letting Assad remain.”

So, amid heightened pressure to respond with force to allegations about the Assad regime’s use of chemical weapons, Obama could be fishing for a middle ground, as Miller argues. The alternative is ugly. If the Obama administration tried to bomb the Assad regime out of existence, the U.S. would then have to militarily occupy Syria, at least to prevent the chemical weapons stockpiles from getting into the hands of the rebels. That occupation would last for the foreseeable future, given the lack of competent or legitimate interim government post-Assad. In that scenario, the U.S. would be fighting another armed insurgency in a crumbling Middle East country – exactly what everyone doesn’t want.

But in a way, this “middle ground” scenario Miller describes – “a single retaliatory attack that strives to make a point rather than a difference” – is even more nefarious than an all-out, boost-on-the-ground war for regime change in Syria. Imagine if President Obama came before the American people and said, “I’m going to bomb another country to make a point. Not to defend American security or interests. Not even to protect the Syrian people from Bashar al-Assad. Just to make a point.” Do you think the American people would buy this for a second?

This is the old “credibility” argument. Obama told the world that Assad’s use of chemical weapons is a “red line” that would prompt U.S. military action. So, to protect Obama’s reputation as a reliable war-maker who bombs people when he says he will, we have to go to war in Syria? Eh, ok…

In his criticism of this doctrine, Micah Zenko described the myth thusly: “Whenever the decision of a foreign leader contrasts with what Washington demands, U.S. global credibility is ‘waning’ and in need of being ‘restored.'”

Rubbish. Going to war “to make a point” is as morally repellent as the use of chemical weapons.