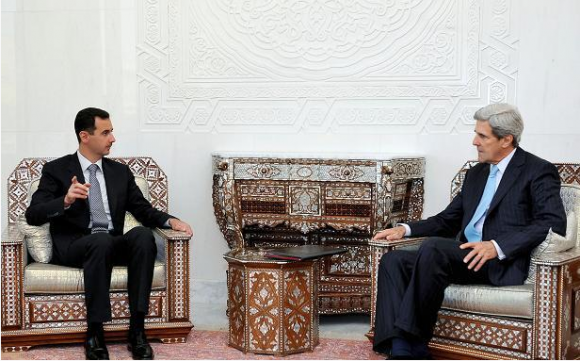 The Obama administration’s case for war against Syria is incredibly thin. That is unsurprising. What is a little bit surprising is that they’re not really even trying to make it more compelling.

As I’ve written, Obama is about to violate both the Constitution and international law by going to war without the consent of Congress or the UN Security Council simply “to make a point,” in the words of former State Department official Aaron David Miller. There is no defensive justification, no legal justification, no strategic justification, and no humanitarian justification. But you’d think administration officials would be able to fake it a little better.

One U.S. official who has been briefed on the options on Syria said he believed the White House would seek a level of intensity “just muscular enough not to get mocked” but not so devastating that it would prompt a response from Syrian allies Iran and Russia.

So not only are we bombing another country “to make a point,” but we’re doing it in a way that ensures we won’t “get mocked.”

Can the case for for get any thinner?

Actually it can, if we just widen our lens to include some context. This McClatchy article is a worthwhile read: it explains that “morality as a motive in U.S. foreign policy is more contingent than absolute.” Genocide, international crimes, aggression, chemical weapons use – all of them are used selectively in order to justify U.S. foreign policy on wholly separate calculations. Let me flesh this out a bit…

Newly declassified CIA documents made headlines this week. They proved that the U.S. supported Saddam Hussein in his 1980s war against Iran with the knowledge that he was using chemical weapons indiscriminately on a near daily basis. Saddam killed far more people with chemical weapons than Assad (allegedly) has.

In the following decade, Saddam morphed into a bad guy. The United States imposed the worst economic sanctions on a single country in recent memory. This U.S.-led economic warfare directly led to the deaths of about 500,000 Iraqi children. Two UN envoys assigned to Iraq in the 1990s resigned in protest because of how horrible the sanctions were, one of them describing it as “genocidal.”

Then in 2003, the United States launched a war on Iraq under false pretenses. The invasion didn’t have a defensive justification, since Saddam didn’t pose even the remotest threat to America, and it didn’t have legal justification either since it wasn’t approved by the UN Security Council. By the most conservative estimates available, about 150,000 people were killed as a result. More reasonable estimates, published in peer-reviewed academic journals, put the number at closer to 600,000-700,000.

Those are three examples in the past three decades of U.S. policy in the Middle East that pull the rug out from under the Obama administration’s moralistic rationale for war against Syria’s Bashar al-Assad. All three demonstrate serious international crimes committed by Washington, all three with humanitarian costs far more severe than anything Assad has done.

So, really…where does America get off?

Why should military action be necessitated by outrage over chemical attacks? Was there a red line on chemical weapons when the US used depleted-uranium ammunition in Fallujah, Iraq? Was there a red line when Israel deployed white phosphorous in Gaza in 2008? Or when Saddam Hussein, then a western ally, gassed the Iranians and then his own people during the 1980s? This arbitrary and self-serving declaration of what’s acceptable is precisely what makes the US so lacking in credibility when it comes to preaching codes of warfare to the Middle East.

156 thoughts on “Bombing Syria ‘Just Enough Not to Get Mocked,’ Or, Where Does America Get Off?”