Via Emily Ekins at Reason.com, polling shows 74 percent of Americans think bombing Syria would be “unwise” and half of Americans believe the D.C. establishment wants war more than the public. 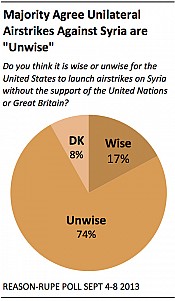 We’ve known about the low public support for strikes in Syria form the beginning, but the latest polling in this Reason-Rupe poll, among others, show opposition growing still.

On the second point, it’s notable that the public thinks, accurately, that the D.C. establishment typically wants war more than ordinary Americans. As Peggy Noonan wrote in a recent piece at the Wall Street Journal, the debate over war in Syria doesn’t look like a fight between Republicans and Democrats, “it looks more like a fight between the country and Washington, between the broad American public and Washington’s central governing assumptions.”

When The Atlantic‘s Conor Friedersdorf kept seeing headlines in the news at the end of August about “growing pressure” for Obama to bomb Syria, he asked, “pressure from whom?”

Where is this pressure coming from? Strangely, that question doesn’t even occur to a lot of news organizations. Take this CBS story. The very first sentence says, “The Obama administration faced new pressure Thursday to take action on Syria.” New pressure from whom? The story proceeds as if it doesn’t matter. How can readers judge how much weight the pressure should carry? Pressure from hundreds of thousands of citizens in the streets confers a certain degree of legitimacy. So does pressure from a just-passed House bill urging a certain course of action, or even unanimous pressure from all of the experts on a given subject. 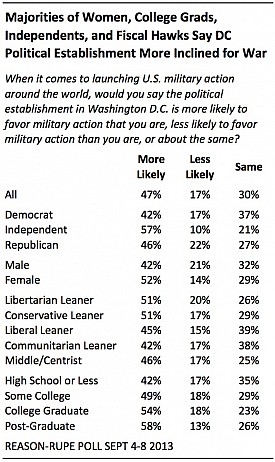 What I’d like is if news accounts on pressure to intervene in Syria made it clear that the “growing calls … for forceful action” aren’t coming from the people, or Congressional majorities, or an expert consensus. The pressure is being applied by a tiny, insular elite that mostly lives in Washington, D.C., and isn’t bothered by the idea of committing America to military action that most Americans oppose. Nor are they bothered by the president launching a war of choice without Congressional approval, even though Obama declared as a candidate that such a step would be illegal.

The insularity of the DC establishment is important. On the one hand, they are ideologically insular, tending to hear only one set of dominant ideas throughout their careers. But they also have their own interests at stake. The all-too-prevalent revolving door between government, military, policy analyst, academic, media pundit, etc. is an incestuous pool of isolated ideologues who believe themselves truly to be objective.

“Warnings about a dangerous world,” writes Micah Zenko in Foreign Affairs, “benefit powerful bureaucratic interests. The specter of looming dangers sustains and justifies the massive budgets of the military and the intelligence agencies, along with the national security infrastructure that exists outside government — defense contractors, lobbying groups, think tanks, and academic departments.”