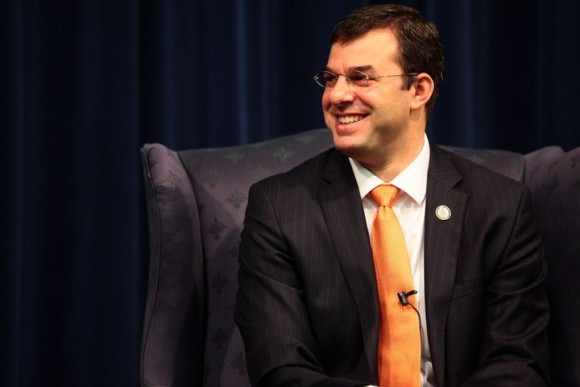 Yesterday, the Washington Post reported that “the CIA has begun delivering weapons to rebels in Syria, ending months of delay in lethal aid that had been promised by the Obama administration, according to U.S. officials and Syrian figures.”

“The shipments,” the article continued, “began streaming into the country over the past two weeks, along with separate deliveries by the State Department of vehicles and other gear — a flow of material that marks a major escalation of the U.S. role in Syria’s civil war.”

Under #NDAA, you'd be indefinitely detained w/o charge or trial if you sent weapons to opposition forces in #Syria. Gov't is breaking law.

I take it Amash is referring to the clause of the USA PATRIOT Act which prohibits giving material support to groups designated by the United States as terrorists. In Holder v. Humanitarian Law Project, the court found that “training,” “expert advice or assistance,” “service,” and “personnel,” all qualified as material assistance.

Last year, the U.S. State Department officially designated the Syrian rebels’ foremost fighting group, Jabhat al-Nusra, a terrorist organization. The U.S. has maintained all along that they are employing a “vetting process” to make sure all the material support they send to Syria’s rebels doesn’t go to the bad guys. But U.S. officials told the Washington Post last year that the CIA knew very little about who was receiving U.S. support, nor could they control exactly where it ended up. The New York Times also reported that the Obama administration has been “increasing aid to the rebels” even though “we don’t really know” who is receiving it.

More troubling, the Times published an article confirming that, “Most of the arms shipped at the behest of Saudi Arabia and Qatar to supply Syrian rebel groups fighting the government of Bashar al-Assad are going to hard-line Islamic jihadists.” Incidentally, those weapons were being sent with U.S. approval and coordination.

More than sending material to officially designated terrorist groups, the U.S. is aiding Syria’s rebels despite the fact that the United Nations has repeatedly condemned them for committing war crimes. Further still, the Wall Street Journal reported two months ago that legal advisers to President Obama warned that the U.S. “risked violating international law” by arming the rebels.

So is the U.S. government breaking the law by aiding and abetting terrorists? I would think so. American citizens have been convicted for much less under these material support laws.

66 thoughts on “Justin Amash: ‘Gov’t Is Breaking Law’ By Sending ‘Weapons to Opposition Forces in Syria’”