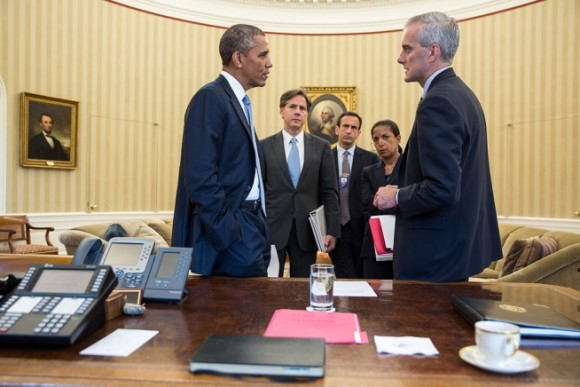 The Obama administration promises over and over again they are only sending arms to secular, freedom-loving Syrian rebels, not those Islamic jihadists associated with terrorist groups like al-Qaeda.

If that’s true, then why was it necessary for the president to unilaterally waive the federal law prohibiting the supply of lethal aid to terrorist groups? The Washington Examiner:

President Obama waived a provision of federal law designed to prevent the supply of arms to terrorist groups to clear the way for the U.S. to provide military assistance to “vetted” opposition groups fighting Syrian dictator Bashar Assad.

Some elements of the Syrian opposition are associated with radical Islamic terrorist groups, including al Qaeda, which was responsible for the Sept. 11 attacks in New York, Washington, D.C., and Shanksville, Pa., in 2001. Assad’s regime is backed by Iran and Hezbollah.

The president, citing his authority under the Arms Export Control Act, announced today that he would “waive the prohibitions in sections 40 and 40A of the AECA related to such a transaction.”

Despite claims of a robust “vetting” process rebels must go through to be eligible for U.S. arms, Mother Jones reported last week that the process is shoddy and easily overcome by disparate rebel officers less concerned with Washington’s vetting process and looking to get as many arms as possible. Moreover, a recent study by the defense consultancy corporation IHS Jane’s found that nearly half of the approximately 100,000 rebel fighters are Islamist.

Current and former intelligence officials have repeatedly said it is next to impossible to control who gets arms that are sent into a chaotic civil war like Syria’s. And Representative Justin Amash (R-MI) noted last week that the Obama administration’s arming of Syrian rebels violates the law.

Not anymore, apparently. The president’s power to pick and choose which laws do and do not apply to his administration has succeeded in sweeping this legal problem under the rug. On the other hand, it’s not so great for PR if you have to exempt yourself from laws that ban support for terrorists.