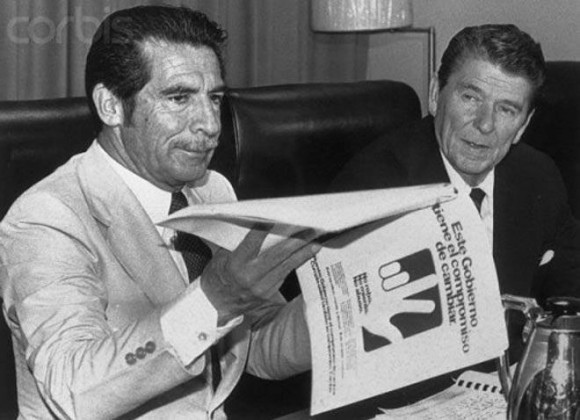 Back in May, former Guatemalan dictator Efrain Ríos Montt was convicted on charges of genocide and crimes against humanity in an historic case, the first time a former head of state had been prosecuted for genocide by his own country. Ten days after his conviction, the Constitutional Court annulled the verdict and wiped Rios Montt’s slate clean again.

“The abrupt annulment of the verdict raised questions of outside interference, particularly from powerful economic and political interests,” a new report from the International Crisis Group concludes. “Judicial authorities must now expedite a new trial and continue to prosecute others responsible for massive human rights violations during the armed conflict.”

A new trial may be in the works, but it will undoubtedly be an uphill battle. Maybe the United States should have something to say about that.

Ríos Montt received training from the U.S. at the infamous School of the Americas. He came to power in a military coup in 1982 and continued to receive enthusiastic support from Washington, even as his regime carried out mass atrocities. The Reagan administration aided, abetted, and covered up Montt’s crimes.

Montt’s forces, with the help of his chief of staff Fuentes, slit the throats of women and children, tortured and mutilated thousands of innocent indigenous peasants, and beat innocent civilians and doused them in gasoline to be burned alive. The UN commission investigating the atrocities has already concluded it constituted acts of genocide. Through it all, Reagan was calling Montt “a man of great integrity” and “totally dedicated to democracy.”

The United States had a history in Guatemala going back to the Eisenhower administration, when in 1954 the democratically elected government of Jacobo Arbenz was overthrown in a coup orchestrated by the CIA. The 1960-96 conflict in Guatemala, with consistent U.S. intervention on the side of the government and paramilitary groups, saw some 200,000 people murdered or disappeared. The height of the bloodshed occurred under Ríos Montt, during which the number of killings and disappearances reached more than 3,000 per month.

Given the power of the United States in world affairs, even words from Washington can have an incredible impact. I’m thinking it’d be appropriate for the Obama administration to publicly apologize for Washington’s complicity in Montt’s genocide and urge a retrial. That’s the least it could do so long as prosecuting Reagan-era officials remains out of the question.

8 thoughts on “A Retrial for US-Backed Guatemalan War Criminal?”