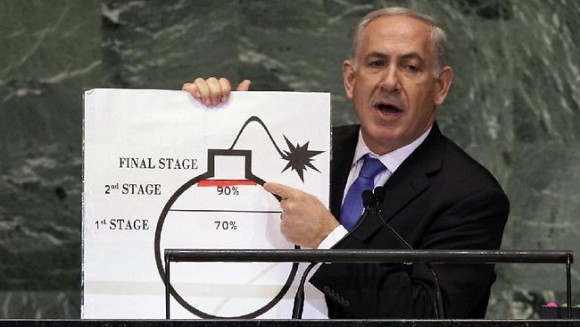 Israeli Prime Minister Benjamin Netanyahu is really upset that the U.S. and Iran seem to be getting closer to rapprochement. But would Israel go ahead and bomb Iran, as it has long threatened, without a green light from the U.S.?

Iran is in the process of offering significant concessions on its nuclear program and asking in return for the U.S. to recognize its right to enrich uranium for peaceful purposes and to lift economic sanctions. A simple deal, it appears. But, asks Uri Sadot of the Council on Foreign Relations, “With the renewed negotiations in place, will Israel dare strike a Middle Eastern nation in defiance of its closest allies?”

“It seems unlikely,” Sadot answers, “but 32 years ago, the answer was yes.”

On June 7, 1981, Israel launched Operation Opera. A squadron of fighter planes flew almost 1,000 miles over Saudi and Iraqi territory to bomb a French-built plutonium reactor on the outskirts of Baghdad, which Israeli leaders feared would be used by Saddam Hussein to build atomic bombs.

The operation was successful, but the international reaction was severe. On the morning following the attack, the United States condemned Israel, suggesting it had violated U.S. law by using American-made military equipment in its assault. State Department spokesman Dean Fischerreiterated the American position that the reactor did not pose a potential security threat, and White House press secretary Larry Speakesadded that President Ronald Reagan had personally approved the condemnation.

Israel didn’t hesitate back then to bomb what it viewed as a threatening nuclear program, even at the risk of provoking a conflict with the United States — and it will likely not hesitate today.

First, the notion that “the operation was successful” is dubious.

“To begin with, Hussein was not on the brink of a bomb in 1981,” writes Colin Kahl, for Obama administration deputy assistant secretary of defense for the Middle East. Saddam “Hussein had not decided to launch a full-fledged weapons program prior to the Israeli strike.”

“By demonstrating Iraq’s vulnerability,” Kahl explains, “the attack on Osirak actually increased Hussein’s determination to develop a nuclear deterrent,” and Iraq followed up by kicking out UN inspectors and reconstituting a nuclear weapons program in earnest (only to have it virtually destroyed in a 1991 war with the US).

But the point remains, Israel will embrace it’s rogue status if it wants to. This was demonstrated again in 2007, when Israel bombed a nuclear reactor in Syria despite opposition to the strike from President George W. Bush.

Hopefully, U.S.-Iranian rapprochement won’t be the driving force behind an Israeli decision to preventively bomb Iran. The consequences of such a strike would be disastrous. To start with, it would be a grave war crime. It would also ensure the Iranian hardliners who oppose détente win over the moderates like Rouhani, thus immediately rendering the historic U.S.-Iran negotiations kaput.

65 thoughts on “Would Israel ‘Go It Alone’ & Bomb Iran Amid Warmed Relations With US?”