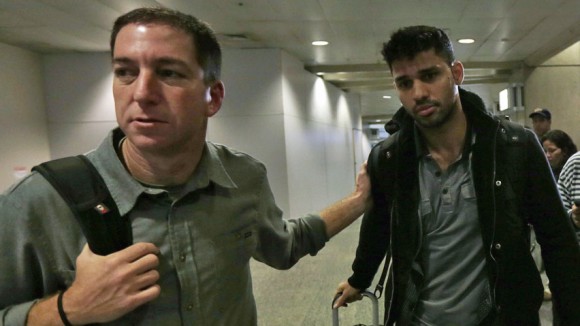 The UK government is charging Glenn Greenwald’s partner David Miranda with “terrorism” and “espionage” for trying to carry documents leaked by Edward Snowden through a London airport in August.

“Intelligence indicates that Miranda is likely to be involved in espionage activity which has the potential to act against the interests of UK national security,” according to the document.

“We assess that Miranda is knowingly carrying material the release of which would endanger people’s lives,” the document continued. “Additionally the disclosure, or threat of disclosure, is designed to influence a government and is made for the purpose of promoting a political or ideological cause. This therefore falls within the definition of terrorism…”

Miranda was transporting documents from journalist Laura Poitras to Glenn Greenwald. His trip was paid for by the Guardian and he was working in that capacity. So when newspapers work to disclose  government secrets…in the newspaper…in order to inform the public, they are engaging in terrorism. Orwell couldn’t have dreamed up a more outrageous satire if he lived to 100.

Writing at the Freedom of the Press Foundation, EFF’s Trevor Timm reacts to the news:

If publishing or threatening to publish information for the purpose “promoting a political or ideological cause” is “terrorism,” than the UK government can lock up every major newspaper editorial board that dares write any opinion that strays from the official government line.

No matter one’s opinion on the NSA, the entire public should be disturbed by this attack on journalism. In fact, this is exactly the type of attack on press freedom the US State Department regularly condemns in authoritarian countries, and we call on them to do the same in this case.

Terrorism is whatever the government says it is.