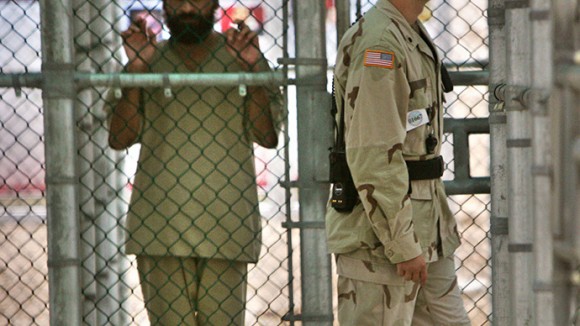 The Washington Post reported last week that hundreds of Afghan detainees held at Bagram airbase were transferred to Kabul’s control, as per earlier agreements, and hundreds were simply released. At Lawfare, Robert Chesney was none too happy about this, arguing they should have continued their detention without due process.

Chesney’s Lawfare colleague John Bellinger saw that as a good opportunity to remind people of what President Obama did with regard to detention policy in Afghanistan. What he did was create “his own Guantanamo in Afghanistan that was more than ten times the size of the Guantanamo he inherited…”

When the Administration came into office, there were roughly 600 detainees at Bagram (and roughly 240 at Guantanamo). By the fall of 2012, when the initial agreement to transfer control of Bagram to the Afghan Government was reached, the number of detainees had quintupled, to more than 3000, including approximately 50 non-Afghan detainees. The Administration has held all of these detainees under the laws of war, but not as POWs under the Third Geneva Convention or Protected Persons under the Fourth Convention; the Administration instead has called them ”unprivileged enemy belligerents” (to be distinguished from the Bush Administration’s much maligned label of “unlawful enemy combatants”).   Moreover, unlike the detainees at Guantanamo, none of the detainees at Bagram have enjoyed the right of habeas corpus to challenge their detention in US courts. Despite the opprobrium they heaped on the Bush Administration, European governments and the press have been strangely silent about the Bagram detention facility; Human Rights First did release a report in 2011 entitled “Detained and Denied in Afghanistan,” but it received little attention.

In his NDU speech earlier this year, President Obama asserted that Guantanamo is a “facility that should never have been opened.” When his speechwriters wrote these lines, however, they may not have realized that President Obama has presided over the creation of his own Guantanamo in Afghanistan that was more than ten times the size of the Guantanamo he inherited and where detainees have had substantially fewer legal rights to challenge their detention.

It’s old news that Obama didn’t close Gitmo, and old news that the Bush administration’s concept of indefinite detention was therefore embraced. That Obama expanded Bagram to 3,000 detainees and held them under the same logic as Bush did Gitmo detainees is also  old news, except that it’s old news that almost nobody knows (I’ve been writing about it since Obama began his surge).

It’s worth thinking about how the Bagram population grew so large and the likelihood that thousands of them are guilty of nothing that would stand up in court (if court were a privilege they were afforded). At  the height of Obama’s surge in Afghanistan, according to a 2011 report by the Open Society Institute, “An estimated 12 to 20 night raids [occurred] per night, resulting in thousands of detentions per year, many of whom are non-combatants.” This at a time when senior commanders in the Joint Special Operations Command were telling the Washington Post that night raids get the wrong guy about 50 percent of the time.

Even with his “unprivileged enemy belligerents” doctrine, Obama has managed to wiggle out of the public backlash Bush received for his “unlawful enemy combatants” doctrine. Somehow.