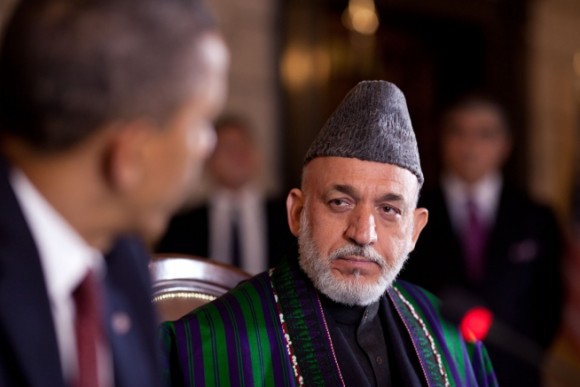 Here’s an uncomfortable reality: the Obama administration’s decision to recommit to the war in Afghanistan and surge U.S. military forces in his first term was made largely to allow for continued U.S. drone attacks in neighboring Pakistan.

The hundreds of billions of dollars put towards counter-insurgency and nation building were in large part a sideshow for the U.S.’s main objective, to secretly bomb a nearby country with which it was not at war. The Afghans who have suffered and died under brutal U.S. occupation didn’t suffer and die for their own country’s security or foreign-imposed “democratic” institutions, but rather to provide for another, separate, legally questionable war in Pakistan that they had nothing to do with. That’s really saying something.

But now that the Washington is on the cusp of signing an agreement that will govern 10,000 (give or take) U.S. forces in Afghanistan for at least the next decade, the question of what will happen with the drone war in Pakistan is a pertinent one.

U.S. drone strikes in Pakistan have climbed down significantly from their peak in the first years of Obama’s presidency (down by almost 40 percent, by some counts). But this does not mean the drone war in Pakistan is over. Just yesterday, a U.S. strike hit an Islamic school and killed 6 people (as always, “alleged terrorists”).

So what does the proposed status of forces agreement with Afghanistan say about the drone war? It says that the United States “has pledged not to use Afghan territory or facilities as a launching point for attacks against other countries.”

Micah Zenko, of the Council on Foreign Relations, gives his take:

Since 2011, when Islamabad kicked the last remaining CIA personnel and contractors out of Pakistani airbases, all U.S. drone strikes have been flown from airbases across the border in Afghanistan. If the United States keeps its pledge and Afghanistan actually enforces the agreement (both big ifs), there is no other plausible alternative host-nation from which the United States would receive permission to conduct drone strikes into northwest Pakistan. Armed drones flying from U.S. naval platforms are a few years away, but the distance from the Arabian Sea to the FATA is significant, posing greater operational risk to drones themselves, and also potentially further exacerbating anti-U.S. sentiment in Pakistan by overflying populated areas.

I had predicted in March 2012 that this scenario could emerge. It is possible that continued U.S. drone strikes in Pakistan will be tacitly accepted by Karzai’s successor in exchange forbags of CIA cash, and the estimated three billion dollars in overt funding for Afghan security forces. Yet, enforcing sovereign host-nation basing rights, overflight rights, shutter control, and constrained rules of engagement are part of the normal behavior of an independent, sovereign country, which Afghanistan might finally be.

Truthfully, the ‘proximity to a war zone’ justification for U.S. drone strikes in Pakistan was thrown out the window once the U.S. ramped up another drone war in Yemen. But the key point is having a host-nation from which to launch the drones, which the U.S. apparently doesn’t have for Pakistan without Afghanistan.

So what it comes down to is whether the U.S. and Afghanistan keep their word. I don’t know about you, but I’m sufficiently reassured when the world’s most corrupt semi-state and the world’s military hegemon with a history of writing its own rules make a promise.

3 thoughts on “What Does Drawing Down the Afghan War Mean For the US Drone War in Pakistan?”