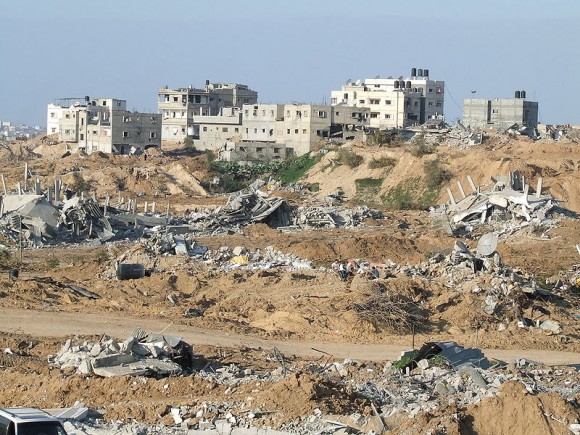 Israel’s blockade of Gaza has long been known for it’s cruel results in strangling the population. But two recent happenings – namely Egypt’s destruction of Gaza’s smuggling tunnels and Israel’s decision ratchet up the blockade by blocking construction materials – have made Gaza virtually “uninhabitable,” according to the UN.

Gaza is facing a power crisis as a result of a shortage of fuel, with blackouts lasting 12-16 hours a day, according to Oxfam. Raw sewage has flooded streets in some areas of Gaza City following the closure of Gaza’s only power plant on 1 November, which made pump stations inoperative. Factories have been forced to cut production, leading to layoffs, and hospitals are running on emergency reserves.

Oxfam said only 40% of Gaza’s fuel needs were being met and consumer prices for petrol and diesel had doubled. Less than 400,000 litres of fuel a day enter Gaza through official crossings, compared with 1m litres a day that were smuggled through the tunnels.

As one UN special rapporteur explained, about one third of Gaza’s arable land and 85 percent of its fishing waters are totally or partially inaccessible due to Israeli military measures, while at least two-thirds of Gazan households lack reliable access to food as a result of the blockade.

According to internal documents released by a court order last year, the Israeli military meticulously and callously calculated the number of calories Gaza residents would need to consume in order not to starve, and used those calculations to inform their blockade policies. As Dov Weisglass, an adviser to former Prime Minister Ehud Olmert, said in 2006, “The idea is to put the Palestinians on a diet, but not to make them die of hunger.”

“[S]ince Israel continue[s] to exercise control over Gaza’s airspace and sea—and to a very large extent over its land borders—Israel is still responsible for this territory and its inhabitants, according to a widely accepted interpretation of international law,” writes Israeli journalist Akiva Eldar.

Israel has ignored repeated international pleas to lift the blockade. “I urge Israel to lift its harsh restrictions in order to ease the plight of civilians and bring an end to the closure,” United Nations Secretary General Ban Ki-moon said last year.

“Keeping a large and dense population in unremitting poverty is in nobody’s interest except that of the most extreme radicals in the region,” he added.

Nevertheless, the siege continues. If international law is in broad agreement that the blockade is illegal, then the role of the United States cannot be trivialized. The Israeli-imposed humanitarian crisis in Gaza persists because the United States continues to support Israel and virtually everything it does. That means American politicians in Washington bear some responsibility for the totally unnecessary suffering of an entire population of civilians.

72 thoughts on “Israel’s Siege of Gaza Is Sadistic and Illegal, Yet US Support Continues”