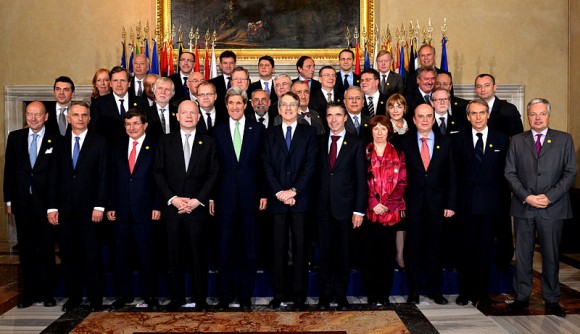 When U.S. leaders and pundits talk about NATO, they describe it as the linchpin of world security and the manifestation of Western liberal values. In other formulations, the U.S. is graciously bestowing a kind of welfare program to its allies in the form of security and protection throughout the European continent because, well, that’s just how much we care about our fellow man.

In reality, NATO is about U.S. control and domination, and a recent report at Foreign Policy demonstrates this fact quite well. Apparently Turkey, a NATO member, has been trying to finalize a deal with a Chinese company to build its first long-range air and missile defense system. This infuriated officials in Washington to the point that they drew up legislation that would ban Chinese-built missile defense systems within NATO. Subtle, I know.

Turkey stunned U.S. officials in September when it reached a provisional deal worth up to $3.4 billion with a Chinese company blacklisted in the United States to build Turkey’s first long-range air and missile defense system. Monday, Congress drew a line in the sand over it: If the 2014 U.S. defense spending bill goes through as proposed, it will ban the use of U.S. funding to integrate Chinese missile defense systems with U.S. or NATO systems, effectively making it impossible for Turkey to operate Chinese equipment with many partner nations.

The provision is one of many hardball tactics in the National Defense Authorization Act (NDAA), and is clearly aimed at short-circuiting Turkey’s plan. Turkey, which entered NATO in 1952, indicated it favored the Chinese company, China Precision Machinery Export-Import Corporation, in part because some components would be built in Turkey, providing a boost to the country’s economy. U.S. and NATO officials strenuously objected to Turkey’s plan, warning that Turkish companies involved in building components for the Chinese system could face U.S. trade sanctions.

It looks like Turkey’s rationale for dealing with the Chinese company mirrors perfectly U.S. rationales for selecting defense corporations to build weapons and defense systems – namely, that it enhances the security of the nation and boosts the economy by creating jobs. But that is a prerogative Turkey doesn’t have, apparently.

The other aspect of this is that Turkey’s willingness to deal with a Chinese company in particular probably irked U.S. officials profoundly. China is a rising superpower and its expanding global influence, especially on military and foreign policy matters, is terrifying to U.S. policymakers intent on maintaining the position of sole superpower, or to put it in Pentagon-ese, hegemony.

As this controversy demonstrates, NATO is not about helping keep our allies safe and strong. International relations scholar Christopher Layne, in his book The Peace of Illusions, describes NATO as “the instrument through which Washington exercise[s] its continental preeminence.” It is essential to U.S. grand strategy, he writes, to “prevent” member countries “from following an independent foreign or security policy.” If countries do attempt to demonstrate independence, Washington views it as “a direct assault on U.S. hegemony.”

NATO ensures a U.S.-run system of control over much of history’s most strategically important geography. It is not a charitable welfare program.

56 thoughts on “NATO Is About US Control: Washington Targets Turkey”