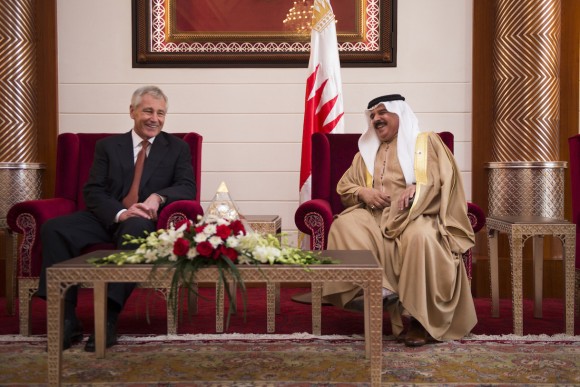 One of America’s best friends and allies is torturing children, even as they continue to receive U.S. aid, weapons, training, and defense guarantees.

Children are being routinely detained, ill-treated and tortured in Bahrain, said Amnesty International in a new briefing published today.

Scores of children arrested on suspicion of participating in anti-government protests – including some as young as 13 – were blindfolded, beaten and tortured in detention over the past two years the organization said. Others were threatened with rape in order to extract forced confessions.

These are not the first revelations of Bahraini children being abused by the U.S. backed regime. “Bahrain security forces routinely detain children without cause and subject them to ill-treatment that may rise to the level of torture,” Human Rights Watch said in a report last September.

“Rounding up kids, throwing them in jail and beating and threatening them is no way for a country to treat its children,” said Joe Stork, Middle East and North Africa director at Human Rights Watch. “The Bahraini authorities need to look into these allegations and immediately call a halt to any arbitrary arrests and mistreatment of children.”

And it’s not just the children. The regime continues to imprison political dissidents. Protests have been outlawed, specifically “sit-ins, rallies and gatherings in the capital Manama.” It is also illegal to “incite hatred” against the security forces (whatever that means), and people can be thrown in prison for calling the king a “dictator” on Twitter (something that has happened to at least eleven people).

Virtually anyone who dissents from the brutal authority of the Bahraini crown is labeled a “terrorist,” a buzzword fashionable among U.S. allies.

None of this prompts the Obama administration to bat an eye, because Bahrain is a strategic asset. The U.S. Navy’s Fifth Fleet is stationed in the tiny Persian Gulf island, giving Washington control over the flow of oil through the Persian Gulf, through which over 40 percent of the world’s seaborne oil transits.

If anything, the Obama administration is worried about keeping the Bahraini regime happy and satisfied with the alliance – not the other way around. Last week, Defense Secretary Chuck Hagel visited Bahrain, stood atop a Navy warship among U.S. soldiers stationed in Bahrain, and promised Bahrain and its other Sunni Arab counterparts that the U.S. would continue to defend them militarily, continue to pressure Iran, and continue to shower them with American money and weapons.