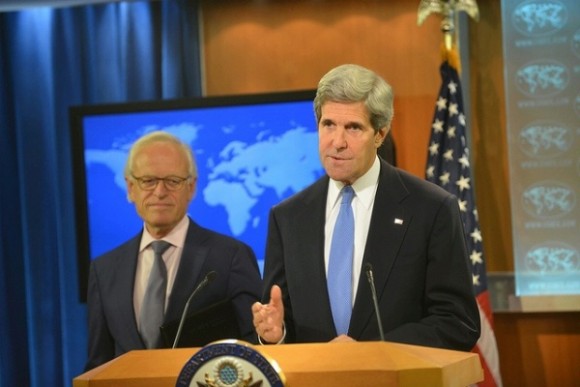 Pro-Israel commentators have been known to downplay the importance of the Israel lobby here in the U.S. “The lobby” is not as influential, coordinated, sneaky, or nefarious as many of its critics maintain, they insist, while often making accusations of conspiratorial thinking.

In a strange, reverse-paranoia article at The Daily Beast, one of these pro-Israel commentators, Eli Lake, makes the argument that there is an “American Lobby in Israel” pressuring select Israeli leaders on a peace deal with the Palestinians. Oddly, he calls this a lobby even though he is referring to elected and appointed Washington diplomats out of the State Department and not private lobby groups or political action organizations.

Specifically, U.S. officials are talking with Israeli military officials about whether it is necessary for Israel to insist on maintaining an army occupation in the Jordan Valley (on Palestinian territory) as part of any final deal. Lake:

The Daily Beast has learned that Martin Indyk, the administration’s special envoy for Israeli-Palestinian negotiations, and his team have quietly been meeting with Israeli reservist generals and other leading national-security experts to discuss American ideas for securing the Jordan River Valley without a permanent Israeli troop presence. That’s an idea the current Israeli defense minister opposes, and strongly.

On the surface, these informal meetings may not sound like lobbying—at least, not the stuff-cash-in-congressmen’s-pockets style of lobbying we hear about in Washington. There’s no hard sales pitch, just a genteel discussion of issues. But the conversations are part of a larger effort to “prepare the Israeli public” to accept hard compromises for peace with the Palestinians, as one U.S. official working on the negotiations put it. And some senior members of the Israeli government, including Defense Minister Moshe Yaalon, are not happy. Yaalon views the get-togethers with the Israeli reservist generals as a way to circumvent his own objections to any security plan that would require Israel not to have troops on the border with Jordan.

Oh, how wily and underhanded of Indyk! Far from a sneaky ploy to gin up support for a final deal without a continued Israeli occupation of Palestinian lands (which of course would never be accepted by the Palestinian side, as Yaalon and Netanyahu know full well), it seems entirely reasonable that the U.S. envoy would speak with Israeli generals about the need (or not) to have a presence in the Jordan Valley.

Lake seems to want to portray this as a quiet coup, since people like Yaalon and Netanyahu oppose IDF withdrawal from the West Bank. But many current and former officials don’t agree that an Israeli presence in the Jordan Valley is necessary as part of a final deal. Dov Weisglass, who was a top advisor to former Israeli Prime Minister Ariel Sharon and by no means a dove, wrote earlier this month that there really is no security justification for such a presence. Former Mossad chief Meir Dagan also argued there is no military or security need.

In reality, the push to maintain an occupation in the Jordan Valley,  an area constituting some 20% of the West Bank, is a political one about denying Palestinian statehood and holding out hope for an eventual annexation of the coveted “Judea and Samaria.” The increasing sway of the settler movement in Israeli politics has caused some politicians to insist on this presence in the Jordan Valley, but it seems clear they only insist upon it because they know it will destroy any chance for a peace settlement.

The last thing Israel wants is a final agreement. As Yousef Munayyer has written at The Daily Beast, “Israel needs negotiations to provide cover for its continued colonization of Palestinian territory and create the impression that its presence in the West Bank is temporary and its withdrawal around the corner.”