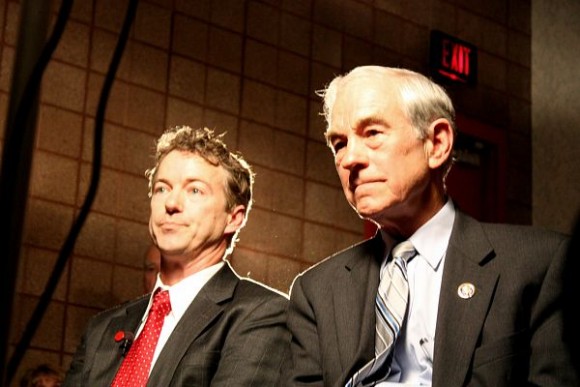 Senator Rand Paul (R-KY) announced this week that he is suing the Obama administration in a class-action lawsuit over the surveillance excesses of the NSA, as revealed by documents leaked by Edward Snowden. Specifically, he is challenging the constitutionality of the NSA’s bulk collection of metadata.

“We think it may well be the largest class-action lawsuit ever filed on the behalf of the Bill of Rights,” Paul said on Wednesday. He compared, as he has many times before, the bulk collection of telephone metadata as precisely the kind of general warrant Britain subjected American colonists to in the lead up the the revolution.

We believe, he said, “that these decisions cannot be made in secret, by a secret court, but they need to be made in open by the Supreme Court.”

One day after this announcement, Paul senior, Ron, announced the launching of a petition calling for Edward Snowden to be granted clemency.

“Edward Snowden sacrificed his livelihood, citizenship, and freedom by exposing the disturbing scope of the NSA’s worldwide spying program,” Paul’s web page for the petition says. “Thanks to one man’s courageous actions, Americans know about the truly egregious ways their government is spying on them.”

Ron and Rand Paul are increasingly the subject of ridicule and marginalization from mainstream politicos. This is especially true among the left, which apparently sees the escalating libertarian bent on the right as a threat to the Democratic Party’s electoral viability. The right detests both Pauls for the same reason, it seems, in addition to finding anything that undercuts limitless government power distasteful.

Both initiatives have an uphill battle, to say the least. But the public is largely on the side of Snowden and transparency. One would be hard pressed to find two individuals in Washington’s political gamut more supportive of Snowden and of the reforms necessary to rein in the NSA. Still, it’s difficult even for leftists who lack fealty to Obama and the Democratic Party to acknowledge this about the Pauls.

14 thoughts on “The Pauls Are Leading the Way on Snowden, NSA”