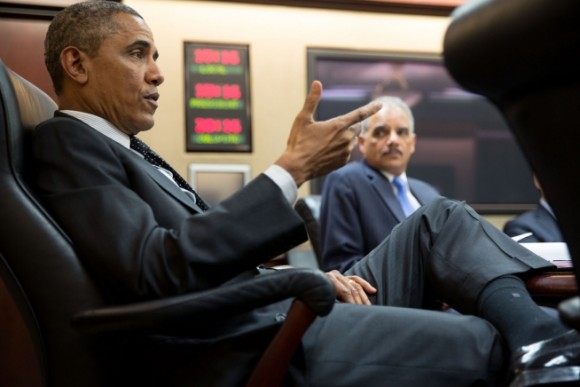 The United States met secretly this week with spy chiefs from Britain, France, Saudi Arabia, Turkey, Qatar, and the United Arab Emirates. The subject was the Syrian civil war and how to better support the rebels, which are by and large al-Qaeda-linked jihadists.

Western and Arab intelligence services that support Syria’s struggling opposition gathered for a two-day strategy meeting in Washington last week that appears to signal a stronger effort to back the rebels.

The spymasters’ conclave featured Prince Mohammed bin Nayef, Saudi Arabia’s minister of the interior, who will now supervise the kingdom’s leading role in the covert-action program.

The Nation‘s Bob Dreyfus says this is “a sign that the [Obama] administration’s commitment to diplomacy is fading, and that Obama is prepared to let the covert operators go to work with a freer leash.”

“Sources” told David Ignatius that these Arab countries “agreed to coordinate their aid so that it goes directly to moderate fighters rather than leeching away to extremists of the al-Nusra Front, an al-Qaeda affiliate, and the Islamic State of Iraq and Syria (ISIS).”

That is not a credible promise. For years now, aid from Arab countries like Saudi Arabia, Qatar, Kuwait, and the UAE has been going to Sunni extremists and most likely contributed significant military and political gains of the al-Qaeda-linked jihadist groups, over the less popular and less numerous “moderate” groups. Even if these regimes were sincere in their efforts to keep lethal aid from al-Qaeda-linked groups (which is dubious) the logistical challenges associated with making sure only “moderate” rebels get the aid are steep enough to doubt such a covert program’s effectiveness.

Ignatius even explains how “aid flows have been disrupted by political infighting between Turkey and Qatar, on the one hand, and Saudi Arabia and Jordan, on the other.” Extremists got their hands on this aid in any case: “The situation has been especially chaotic in northern Syria, south of the Turkish border, where the al-Qaeda affiliates have taken advantage of the confusion.”

In addition to this, Ignatius also notes, the CIA has been covertly training and arming Syrian rebels inside Jordan.

One would have thought we were passed this. After the failed effort in Washington to boost support for Syrian rebels and the bumbling screw up that was the Obama administration’s quickly-aborted plan to bomb Syria, it seemed as if power brokers in the White House and Capitol Hill came to grips with the fact that there were no good options. A no-fly zone would worsen the humanitarian situation and produce a dangerous power vacuum with the end of the Assad regime and boosting arms supplies to the rebels seemed dumber and dumber due to the increasingly extremist make-up of the opposition. The political science literature is pretty clear on this: civil wars in which competing foreign powers support both sides tend to last longer and reach stalemate, making both the humanitarian and the strategic circumstances all the worse.

Given these realities, the Obama administration’s continued efforts to meddle in the Syrian civil war lack common sense. It won’t save lives (as liberal interventionists are wont to claim as their motivation) and it will either produce further stalemate or, although it’s extremely unlikely, generate the collapse of the Assad regime (which would consequently increase the position of jihadist groups). None of these are desirable outcomes.

The New York Times speculated the other day about why the Obama administration was apparently changing its mind on more active support for the rebels: “Mr. Obama’s apparent willingness to drop objections to supplying the rebel groups with heavier weapons may simply be an acknowledgment that Saudi Arabia and gulf states that are frustrated with American policy are now prepared to do so anyway, without Washington’s blessing.”

Ah yes, Saudi Arabia – the tail that wags the dog. Either that or Obama’s ‘do-something’ mindset simply hasn’t yet been exhausted.

68 thoughts on “On Syria, Obama Dons His Interventionist Cap – Again”