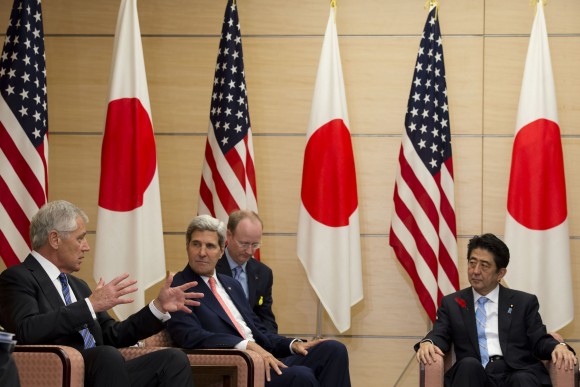 The geopolitical tensions arising between China and its smaller neighbors are complex. There are ways to mitigate them and ways to exacerbate them. For the U.S., however, it’s a much simpler question. Considering the maritime and territorial disputes are none of our business, and we have no right to meddle in regional disputes half a world away, Washington simply has to renounce its claimed prerogative to dominate the Asia-Pacific and – voila! – we no longer have to concern our Air Force, Navy, Army, Special Operations forces, diplomats, and politicians with such parochial issues.

In anticipation of a number of talks he is scheduled to give in Tokyo next week, Noam Chomsky was interviewed on the regional tensions in the Asia-Pacific by the Japan Times. Here are some excerpts.

You arrive in Japan at a possibly defining moment: the government is preparing to launch a major challenge to the nation’s six-decade pacifist stance, arguing that it must be “more flexible” in responding to external threats; relations with China and Korea have turned toxic; and there is even talk of war. Should we be concerned?

We should most definitely be concerned. Instead of abandoning its pacifist stance, Japan should take pride in it as an inspiring model for the world, and should take the lead in upholding the goals of the United Nations “to save succeeding generations from the scourge of war.” The challenges in the region are real, but what is needed is steps toward political accommodation and establishing peaceful relations, not a return to policies that proved disastrous not so long ago.

How in concrete terms, though, can political accommodation be achieved? The historical precedents for the kind of situation we face in Asia — competing nationalisms; a rising undemocratic power with opaque military spending and something to prove in tandem with a declining power, increasingly fearful about what this means — are not good.

There is a real issue, but I think the question should be formulated a bit differently. Chinese military spending is carefully monitored by the United States. It is indeed growing, but it is a small fraction of U.S. expenditures, which are amplified by U.S. allies (China has none). China is indeed seeking to break out of the arc of containment in the Pacific that limits its control over the waters essential to its commerce and open access to the Pacific. That does set up possible conflicts, partly with regional powers that have their own interests, but mainly with the U.S., which of course would never even consider anything remotely comparable for itself and, furthermore, insists upon global control.

Although the U.S. is a “declining power,” and has been since the late 1940s, it still has no remote competitor as a hegemonic power. Its military spending virtually matches the rest of the world combined, and it is far more technologically advanced. No other country could dream of having a network of hundreds of military bases all over the world, nor of carrying out the world’s most expansive campaign of terror — and that is exactly what (President Barack) Obama’s drone assassination campaign is. And the U.S., of course, has a brutal record of aggression and subversion.

These are the essential conditions within which political accommodation should be sought. In concrete terms, China’s interests should be recognized along with those of others in the region. But there is no justification for accepting the domination of a global hegemon.

And, as Chomsky always shows, the reality of the tiff between the U.S. and China is crystalized by the simple thought experiment of reversing the roles:

…What’s the U.S. role in all this? It seems clear that Washington does not want to be pulled into a conflict with Beijing. We also understand that the Obama administration is upset at Abe’s views on history, and his visits to Yasukuni Shrine, the linchpin of historical revisionism in Japan. However we can hardly call the U.S. an honest broker…

Hardly. The U.S. is surrounding China with military bases, not conversely. U.S. strategic analysts describe a “classic security dilemma” in the region, as the U.S. and China each perceive the other’s stance as a threat to their basic interests. The issue is control of the seas off China’s coasts, not the Caribbean or the waters off California. For the U.S., global control is a “vital interest.”

We might also recall the fate of Prime Minister Yukio Hatoyama when he followed the will of the large majority of Okinawans, defying Washington. As The New York Times reported, “Apologizing for failing to fulfill a prominent campaign promise, Hatoyama told outraged residents of Okinawa on Sunday that he has decided to relocate an American air base to the north side of the island as originally agreed upon with the United States.” His “capitulation,” as it was correctly described, resulted from strong U.S. pressure.

It goes without saying that Washington wouldn’t accept for even one moment a China with tens of thousands of troops and security guarantees with, say, Cuba, Honduras, and Venezuela. If China routinely patrolled fleets of navy warships along U.S. coasts and had a policy explicitly aimed at containing U.S. power in its own backyard, it is dubious that the U.S. would respond peacefully. The U.S. wouldn’t accept it. Why should we expect China to?

Update: For a helpful in-depth look at the U.S.’s containment policy towards China, see the Cato Institute’s Justin Logan here. He writes that the U.S. has “developed a posture in Asia that is designed with the obvious purpose of putting China’s seaborne commerce at risk.” Again, that is something Washington would never let China do without bombing in retaliation. Logan also argues that China’s rise does not threaten the U.S.: “no one has specified precisely how even a very militarily powerful China would directly threaten US national security.”

12 thoughts on “Reminder: ‘The US Is Surrounding China With Military Bases, Not Conversely’”