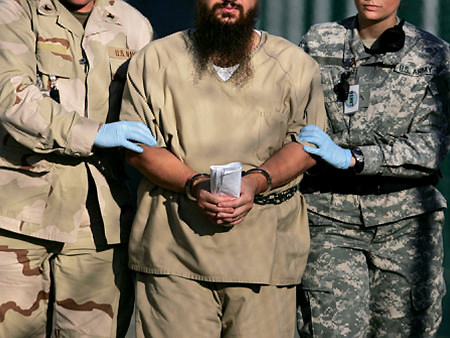 Imad Abdullah Hassan, a Yemeni detainee in Guantanamo that has spent 12 years in a cage without ever being charged with a crime, is suing President Obama. He says the forced feeding he has been subjected to in order to disrupt his hunger strike amounts to torture.

At The Atlantic, Conor Friedersdorf lists some of the allegations in the lawsuit:

One time after being subjected to this treatment, Friederdorf writes, Hassan “lost consciousness and spent two days in critical condition.” He now suffers from “severe gastric pain, damage to both his nostrils, sinus problems, and bouts of pancreatitis, sometimes brought on by the use of a high-fat nutritional supplement.”

Of course, the Obama administration denies force feeding amounts to torture, despite this harrowing account of what it’s like. Human rights officials from the United Nations have declared, however, that force feeding amounts to torture, saying “it is unjustifiable to engage in forced feeding of individuals contrary to their informed and voluntary refusal of such a measure.”

It’s worth noting that Hassan, like some 86 other Gitmo detainees, has been cleared for release by a judge who found there was not enough incriminating evidence to justify keeping him imprisoned. No matter: Obama continues to deny him his freedom and to criminally abuse him.

37 thoughts on “At Gitmo, Obama Tortures Too”