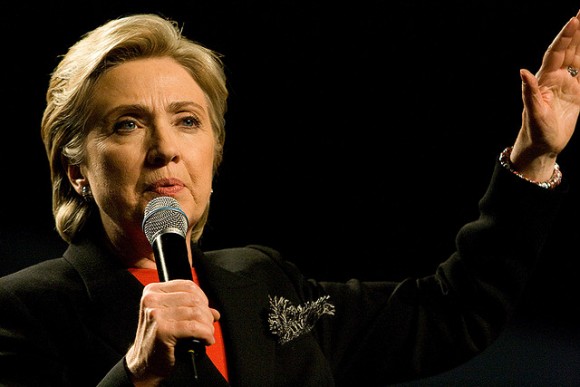 Former Secretary of State Hillary Clinton, the Democratic Party’s admired front-runner for the 2016 presidential elections, made headlines last week when she spoke out against NSA whistleblower Edward Snowden. At an event at the University of Connecticut she hit him with the boilerplate accusations of anti-Americanism, questioning his motives for civil liberties and transparency by citing his flight to human rights offenders like China and Russia, and finally accusing him of aiding the terrorists.

Some saw it as a strange tact for Clinton, who will be trying to lock up left-of-center voters for her latent presidential campaign. The tide would seem to be against her, given the fact that every branch of government has acknowledged the NSA’s overreach and the need for reform, the poll numbers in favor of NSA reform are very high, and Snowden and the journalists he leaked to keep getting awards and high honors all around the world.

But she seemed unashamed in her condemnation of the whistleblower and in her bold defense of the Orwellian national security state. To be frank, Hillary Clinton has always been unashamed of her extremely hawkish and right-wing positions on national security and foreign policy issues.

Writing at Reason magazine, Steve Chapman explains how Clinton “is a long-standing and unblushing advocate of frequent military intervention abroad.” She voted for the war crime of invading Iraq, urged an even bigger surge in Afghanistan as secretary of state, and was the leading advocate within the Obama administration for strong military action in both Libya and Syria, Chapman reminds us.

She is even on the hawkish end of the spectrum on Iran: “Going back to 2007, she has stressed the option of launching airstrikes to keep Tehran from getting the bomb.”

The Democratic Party, which nominated Obama because he represented a more prudent approach to foreign policy, apparently is happy to do a 180 with Clinton. She may relish the chance to distinguish herself from her former boss, reports The New York Times, by “presenting herself in her book and in any possible campaign as the toughest voice in the room during the great debates over war and peace.” Not the wisest; the toughest.

Proving one’s toughness by endorsing war is a habit of American politicians, particularly Democrats wary of being portrayed, as Obama has, as naive and vacillating. This option may be even more tempting for someone who aspires to overcome any suspicion that female politicians are weak.

Is this seriously the Democratic Party’s best choice for president in 2016? At least Obama maintained the pretense of an antiwar, pro-transparency candidate. How embarrassing the next election will be for the left!