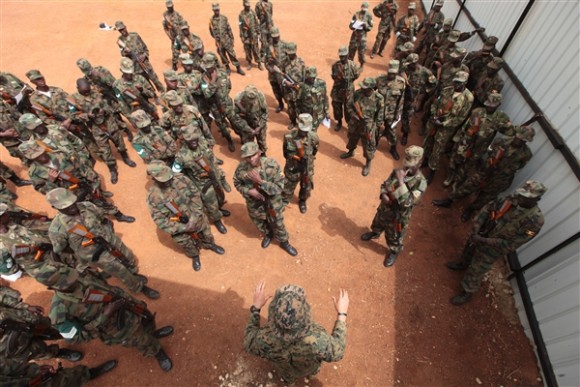 The hysteria that has erupted over the Nigerian militant group Boko Haram over the last few days has been remarkable. The terrorist group abducted hundreds of girls and, thanks to a viral awareness campaign and threats from Washington to intervene, Boko Haram suddenly became America’s new Great Menace that presents an existential threat to the United States.

CNN’s Erin Burnett was particularly unhinged in the show that aired last night. “Boko Haram’s brutal violence includes burning people alive in mosques and churches and slitting the throats of students,” she warned her audience of people who surely have never heard of the group before. “Even among extremist groups, their tactics are vile.”

“You could describe them as the Taliban that have taken it to the next level,” retired U.S. Gen. James Marks said, “maybe a Taliban on steroids.” Boko Haram “is an absolutely horrible, beyond definition horrible organization that clearly needs to go away completely and we have to facilitate their departure.”

Burnett and her U.S. military guests were sure to bring the threat of Boko Haram back to America, cognizant of the risk of giving the impression that this is a Nigerian problem that’s none of our business. Gen. Carter Ham, former Second in Command at the Pentagon’s Africa Command warned, “They certainly present a very, very significant risk in Nigeria, more broadly across the region, and the leaders of Boko Haram have been very clear for the past couple of years that they aspire to attacking Westerners and specifically the United States, its people, and its interests.”

Burnett followed up with the terrifying reminder that nowadays “there are all these direct flights between Nigeria and the United States.”

And then, the alley-oop, Burnett asks Ham, “Do you think they need to be stopped now, that the United States needs to somehow become involved more actively to stop them from striking?”

They’ve set it up for the frightened, ignorant audience. This group is violent, evil, comparable to our undisputed enemies the Taliban and al-Qaeda, and they aspire to attack America. The next logical step is U.S. military intervention, right!? Ham obviously responded in the affirmative. Forget that nobody said Boko Haram was on the verge of striking the United States, or any Western country for that matter.

Actually, the United States has already intervened. Since 2009, the U.S. has sent over $1.3 billion to the Nigerian government and U.S. troops have been sent on the ground to train and cooperate with Nigerian forces in battling domestic rabble rousers like Boko Haram.

A Congressional report issued in 2011 found that, “Boko Haram has quickly evolved and poses an emerging threat to U.S. interests and the U.S. homeland.”

Patrick Meehan, chairman of the U.S. Congressional committee that drew up the report, admitted, “While I recognize there is little evidence at this moment to suggest Boko Haram is planning attacks against the [US] homeland, lack of evidence does not mean it cannot happen.” Wow.

As best I can tell, Boko Haram seems to have had an explicitly local agenda until the United States started meddling in Nigeria and Africa became Washington’s new pet project in the “war on terror.”

It should go without saying that military interventions in far off countries that intend to neutralize threats that don’t even exist yet tend to create a greater constituency for groups like Boko Haram and Al Qaeda in the Islamic Maghreb by giving people reasons to hate U.S. intervention and fight against it. Through the Pentagon’s Africa Command, the U.S. is infiltrating Africa with U.S. troops and training and equipping militaries in Algeria, Burkina Faso, Chad, Mali, Mauritania, Morocco, Niger, Nigeria, Libya, Egypt, Kenya, Uganda, Senegal and Tunisia in the name of preventing “terrorists from establishing sanctuaries.” The strategy appears irreconcilable with recent history, however, given the U.S.-sponsored invasion of Somalia by Ethiopia in 2006 which gave rise to the militant group al-Shabaab – now ironically justifying more intervention.

U.S. politicians, military officials, foreign policy wonks, and news anchors are trained to see every violent non-state group anywhere in the world as a direct threat to America. They use their soapboxes in the media to get that point across to an unsuspecting American population. It helps politicians appear strong, helps military bureaucrats get funding, helps wonks appear knowledgeable, and helps news anchors feel important.

In reality, Boko Haram does not present a threat to the U.S. and U.S. intervention of any kind is not needed, nor would it do any good. What should be obvious, though, is that the burden of proof for the supposed threat and potential intervention is on those who assert it. Evidence-free fear mongering shouldn’t be enough.

20 thoughts on “Everything Is A Threat: The Fear-Mongering and Hysteria Over Boko Haram”