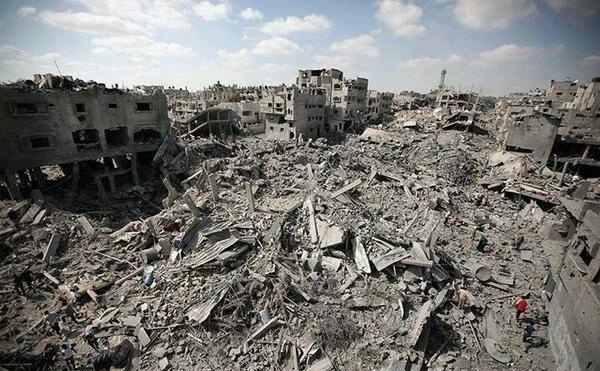 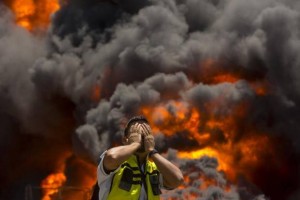 You know how sometimes a cop will turn off his dash cam (often “mistakenly,” or it “malfunctions”) right before he brutalizes or executes a victim? That’s what Israel did yesterday, when it knocked out Gaza’s only power plant, killing the power for most of the population. This, besides its economic/humanitarian impacts, will make it much harder for Gazans to convey their plight to the rest of the world.  As smartphone and computer batteries run out, powerful, sympathy-inducing voices from Gaza, like that of the 16-year old Twitter-user Farah Baker (@Farah_Gazan), and the 10-year-old girl in this viral video, will be silenced. And as camera batteries die, we may see fewer heart-rending images of the carnage and wreckage that Israel’s pogrom is inflicting upon civilians, especially children.

Israeli government officials and their cheerleaders will welcome such a development, as one of their chief complaints in interviews has been the “unfair” impact that such images of, in Israeli Prime Minister Benjamin Netanyahu’s words “telegenically dead Palestinians,” have had on world opinion. Michael Oren, former Israeli ambassador to the US, recently fretted that, “the pictures look terrible on the TV, and that immediately translates into diplomatic pressure on Israel to accept a far-less advantageous ceasefire.” Oren was particularly worried that the outrage over the images would lead to Israel having its (blood-soaked) “hands tied” by the UN Security Council.

After all, imagine if these pesky personal recording and communication devices had been around in 1947. If its massacres had been broadcast in real time, the Naqba might never have even gotten off the ground!

Surely, Netanyahu and Oren hope that the electricity black-out will result in an atrocity black-out. And with the “telegenically” dead conveniently made invisibly dead, the massacre might become “out of sight, out of mind” enough to world opinion, that Israel can secure a Carthaginian peace, with their precious starvation blockade of Gaza fully intact.

Leaving Gaza with no electricity, and therefore no running water or sewage treatment, also furthers another Israeli aim. Netanyahu has stressed the war objective of stripping Hamas of its rocket-firing ability. We’re not talking centrifuges and IBMs here. The Qassam rockets Hamas uses consist of little more than piping and fertilizer. So, the only way that an assault could make the creation of such primitive devices impossible would be by completely obliterating any remnants of technology and the division of labor left in Gaza: by bombing the Palestinians “back to the Stone Age” and destroying their infrastructure. A chilling expression of such a desire was given by Gilad Sharon, the son of former Israeli Prime Minister Ariel Sharon in the Jerusalem Post in 2012:

“We need to flatten entire neighborhoods in Gaza. Flatten all of Gaza. The Americans didn’t stop with Hiroshima – the Japanese weren’t surrendering fast enough, so they hit Nagasaki, too.

“There should be no electricity in Gaza, no gasoline or moving vehicles, nothing.”

Gilad is getting exactly what he wanted, from the knocked-out electricity to the flattened neighborhoods, like this one: 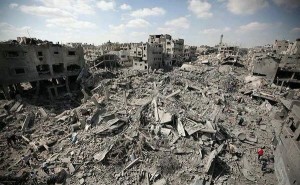 Indeed, a Netanyahu-allied editor called earlier this month for “returning Gaza to the Stone Age and for removing the snake’s teeth by destroying Hamas’s arsenal… We should return the Hamas people to a situation in which they can only throw stones at us just as things were during the first intifada.”

Further destroying Gaza’s division of labor is also surely an unspoken goal in Israel’s much ballyhooed ongoing destruction of Gaza’s “terror tunnels,” which, as Jason Ditz has pointed out, are actually chiefly “economic survival” tunnels. Moreover, most of the personal electronics used by Gazans to document, tweet, record, and post their suffering and loss were probably smuggled in through these tunnels. This makes the destruction of the tunnels, like that of the power plant, another twofer for Israel: helping to both economically cripple and silence their victims.

And of course, after “civilized” Israel thus further barbarizes (de-civilizes, disintegrates the division of labor of, etc) the people of Gaza, Hasbarists on social media will continue to use that very imposed desperate barbarism (or “savagery”) to justify even more barbarization. This is a very old imperial ploy, as Murray Rothbard indicated in his critique of Ayn Rand’s support of, in her words, the “civilized men” of Israel against Palestinian “savages”. In 1973, he responded in The Libertarian Forum:

“Perhaps the Palestinian Arabs are “savages” because they live miserable lives in hovels on the desert; but they do so because—one and a half million of them—they were driven out of their homes and properties by the Zionists, and they remain in dire poverty as refugees. Miss Rand’s strictures are chillingly reminiscent of the English who drove the Irish out of their farms and lands by force, in the sixteenth and seventeenth centuries, and then looked down their noses at the “wild, savage” Irishmen who unaccountably spent their lives wandering around the forests.”

Of course it is the imperial militarism of Israel that is the greatest barbarism in this matter, how ever many coffee shops and internet start-ups there may be in Tel Aviv. The Imperial Roman spectators, both patrician and pleb, who gazed and cheered at gladiatorial bloodshed before visiting a public bath, were more barbaric than the tribal, war-captive gladiators themselves. Similarly, the greater barbarians today are not the expropriated, impoverished, desperate Gazans being aerial-bombed, but, in addition to the politicians and soldiers doing the bombing, the Israeli hill-top spectators who sipped espresso and dreamed of genocide while viewing the 2008-2009 assault, and who cheered each death-dealing bomb blast from lawn chairs during the present one. The jingoism many Americans revel in as they watch 4th of July fireworks shows evoking “bombs bursting in air” is bad enough. But to treat the actual bombing of human beings as just the same sort of patriotic outdoor entertainment reveals a deep sickness of the soul.

And yet when a CNN reporter, on Twitter, referred to a group of such spectators as “scum,” after witnessing their macabre rounds of applause and being threatened by them with violence, it was the reporter who was denounced and fired. That is the extent to which the media establishment is oblivious to concerns of basic human decency and civilization, especially when they impede imperial designs.

Herbert Spencer was right when he wrote in 1850: