The U.S. government still keeps 41 prisoners at the Guantánamo Bay Detention Camp in Cuba. Incredibly, some of these so-called alien enemy combatants have been imprisoned for up to 15 years without benefit of trial; indeed, without even being charged with a crime. How is this possible in a democracy? What does it say about our country?

I happen to own an old map of Cuba from 1897 that shows Guantánamo Bay, which is along the southeastern coast of Cuba. Here’s a photo of a segment of my old map that shows the Bahia de Guantánamo: 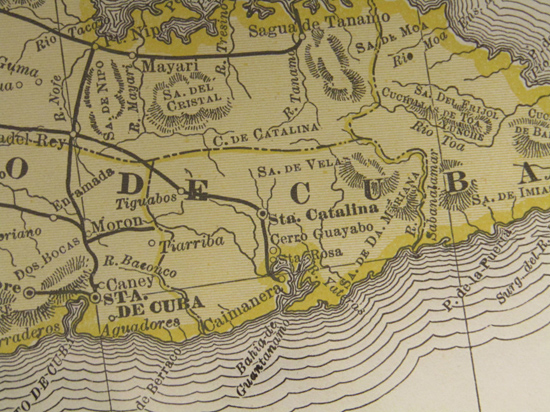 Who could have predicted that when our government, in an imperial land grab, “leased” this base from Cuba in 1903, it would become a century later the site of a loathsome prison for Muslim men snatched mostly from central Asia in a “global war on terror”?

In the immediate aftermath of 9/11, the U.S. government needed a place to send prisoners gathered in the chaotic roundup of suspects in the war’s opening stages. Among other locations they chose the U.S. naval base at Guantánamo, considered a “safe” spot since it’s both isolated and not in the USA while also being far from the eyes of the media. What was an expedient, a temporary holding facility, became permanent. President Obama vowed to close it and failed; President Trump has vowed to expand it with fresh batches of prisoners.

In a remarkable piece at TomDispatch.com, Erin Thompson reminds us that the prisoners at Guantánamo are human beings. She did (and does) this by curating and displaying their art works. Their paintings, ship models, and other creations remind us that they exist, that they create, that they hope, that they dream. The U.S. government has responded by asserting ownership rights over their art.

America’s prison at Guantánamo Bay has been a spectacular fail. Its very existence amounts to a huge propaganda victory for terrorists and would-be terrorists everywhere. It’s a stain on our democracy (what’s left of it). In the eyes of much of the world, it reveals the USA itself to be a terrorist.

The persistence of this prison shows America is losing its own “war on terror.” Our government lacks the courage to try these men because of fear a few might go free and perhaps spearhead future attacks, despite a national security complex that spends roughly three quarters of a trillion dollars to predict and prevent such attacks.

To paraphrase Shakespeare in Julius Caesar, “Cowards die a thousand deaths; a hero dies but once.” By keeping this prison open, and by refusing to offer justice to its occupants out of fear of what they might do if released, we are dying a thousand deaths.

One thought on “America’s Cowardly Prison in Cuba”