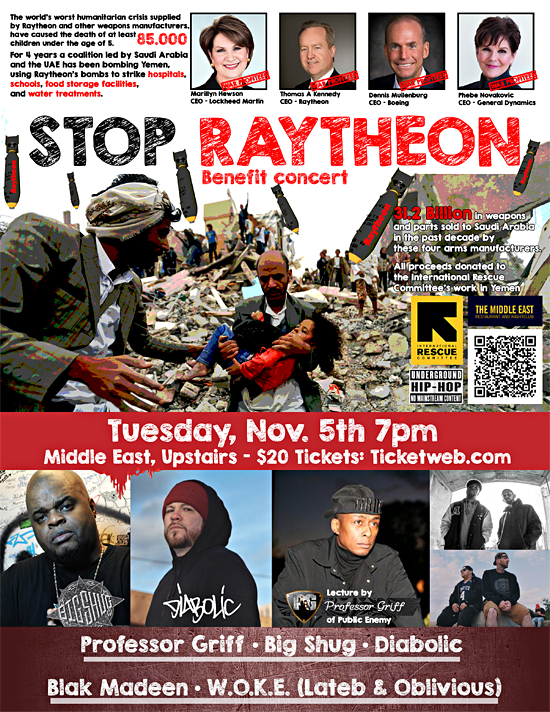 As Professor Griff always says, "hip hop is the infinite power healing of our people, it serves as a voice for the voiceless." Public Enemy and other groups like the Geto Boys taught us this through songs like "Fuck a War" and "Fight the Power."

During the era of the Vietnam War, popular music conveyed an antiwar sentiment. The band The Animals inspired a generation of young people to rally against the war through their song "We Gotta Get Out of This Place," leading thousands to march on Capitol Hill in 1969 for the Moratorium to End the War in Vietnam.

Although we are currently living through the longest war in US history, popular music has changed dramatically. Today, commercial music would never dare oppose wars like Afghanistan or Iraq. You never hear Miley Cyrus or Cardi B talk about weapons manufacturers’ skyrocketing profits from Saudi Arabia’s continued bombing campaign targeted at Yemeni civilians.

At least one Yemeni child dies every ten minutes because of malnutrition, diarrhea, and respiratory tract infections. The United Nations has called it the world’s worst humanitarian crisis, and US companies like Raytheon, Boeing, Lockheed Martin, and General Dynamics, who continue to supply all the weapons, are directly responsible. So why do we not hear popular and influential rappers like Jay-Z or Drake talk about the genocide in Yemen?

While there are still artists in hip-hop who speak truth to power, such as Immortal Technique, Professor Griff, Lupe Fiasco, Diabolic, Killer Mike, and a few others, their voices are diluted by commercial hip-hop, which glorifies drugs and crime. It is hard to decipher any lyrics from the incessant mumbling. Record executives encourage this music and the lifestyle it promotes, ultimately exploiting their artists and pumping their music into the ears of a whole generation of impressionable kids. This results in more crime, hard drug use by teens, and higher rates of overdose, particularly from drugs like Xanax and lean. It is as if record execs are on a mission to dumb down the listeners.

Yet benefit concerts for children suffering from the war in Yemen have been brewing underground in Phoenix, Cleveland, and now in Cambridge, Massachusetts. The Middle East nightclub will host a hip-hop benefit concert on Tuesday, November 5th called "Save Yemen Stop Raytheon." Since Raytheon is headquartered in Waltham, Massachusetts, just 20 minutes away from where the concert will take place, the event is calling attention to the fact that Raytheon is a major supplier of arms to Saudi Arabia.

Raytheon’s bombs have been used to target weddings, civilian homes, water drilling rigs, and funeral ceremonies in Yemen. President of Raytheon, Thomas Kennedy, earned $24.9 million, in 2017, while in 2016 he earned $20.5 million, and in 2014 – before the war in Yemen began – he earned 13.7 million.

And now, Raytheon has even built a new base in Saudi Arabia to further "expand on the 50+ year partnership between Raytheon and the Kingdom of Saudi Arabia," as stated on Raytheon’s website. In other words, its new base is there to help Saudi Arabia further obliterate Yemen.

The Save Yemen Stop Raytheon benefit concert will feature performances by Big Shug from the legendary hip-hop group Gang Starr Foundation, rapper Diabolic, Professor Griff from Public Enemy, and two local hip-hop groups from Boston known as Blak Madeen and W.O.K.E. All the proceeds will be donated to the International Rescue Committee’s work in Yemen.

If you live in the area, I would highly recommend going! Diabolic’s lyrics portray a deep understanding of the military industrial complex while Professor Griff’s lecture listeners on some of the conditioning that occurs in pop culture. You can purchase your tickets here.

Marcelo Guadiana writes for the Borgen Project, focusing on war and poverty. He graduated at UMass Boston with a double B.A. in political science and economics.